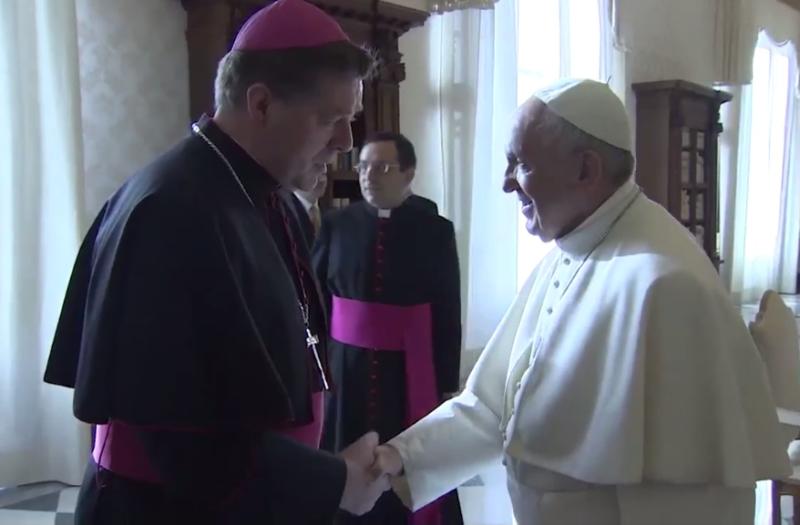 The Bishop of Ardagh and Clonmacnois Francis Duffy has said the Catholic Church's handling of clerical sex abuse “cannot be ignored and forgotten” as pressure mounts on Pope Francis to publicly address its fallout this weekend.

The Pontiff has come in for increasing calls to speak openly about a subject which has continued to dog the Vatican since the 81-year-old's elevation to the Catholic Church's top table was confirmed  almost five and a half years ago.

In keeping with that climate, Bishop Duffy issued a lengthy statement to the Leader this week as he reflected on the Pope's impending visit.

Like a number of Church leaders before him, Bishop Duffy stressed the importance of how this week's World Meeting of Families was not allowed pass without reference being made to the enduring legacies brought about  by its handling of clerical child sex abuse.

“I expect that Pope Francis will address in a direct and forthright way the crime of child abuse and its terrible impact on survivors and their families,” he said

“It is not past history, it is present reality; it is an appalling and dark part of the Church's story and cannot be ignored or forgotten.”

Pope Francis will spend two days in Ireland, touring a number of locations including the shrine in Knock and the Capuchin Day Centre, as well as performing a mass to more than 500,000 people in Phoenix Park on Sunday.

Despite those acceptances, Bishop Francis said he remained confident over how  the Church had, and continued to make real and  tangible difference to communities across the world.

Equally, the head of the Ardagh and Clonmacnoise Diocese predicted that similar emphasis would be given to  Church reform into the future.

“He (Pope Francis) will also affirm the extraordinary good that was and is being carried out by Church organisations, religious congregations, parishes, families and individuals,” said Bishop Duffy.

“There is no doubt that initiatives with those on the margins, youth, and small communities and faith formation programmes, while not heralded, are effective and make a positive difference.

"I expect he will challenge us to be more inclusive and more innovative in how we reorganise our Church, involving women and men, youth and those who feel excluded."

Bishop Francis was just as keen to reminisce over his memories of the last time a Pope came to these shores, conceding the experience was one which still lived with him close to 40 years on.

"Thirty nine years ago during the visit of Pope John Paul II to Ireland I was a student in Saint Patrick's College, Maynooth," he said.

"I remember very well the sense of anticipation as we walked a few miles to the Phoenix Park, everyone was on foot, no cars to be seen or heard; there was an unusual but happy early morning stillness.

"When we reached the place for the Mass I found it a little overwhelming as I had never witnessed such a multitude of people.

"There was great excitement when the aircraft flew overhead with the Pope on board and then even more so as his little red helicopter circled the vast assembly just before the Mass.

"The three phrases, in heavily accented English, that stand out for me from that historic first visit of a Pope to Ireland are 'Like St Patrick, I too have heard the voice of the Irish calling to me', 'On my knees I beg you to turn away from the paths of violence and return to the ways of peace' and 'Young people of Ireland I love you'.

I hope Pope Francis' visit will be even more memorable.

"I read in a newspaper two weeks ago the apt comment that Pope Francis speaks 'fluent human'.

"I think it is a great description, he is steeped in human life and experience and in profound faith.

"He will bring a message of hope and also one that is challenging.

"Pope John XXIII is often referred to as 'good' Pope John, now of course he is Saint John XXIII.

"He established the Second Vatican Council and is credited with opening the windows of the Church to let in the light of the Holy Spirit.

"I like to think of Pope Francis, as doing something similar, he is keeping the Church doors open, he is not closing them, and he is not excluding people.

"Instead he is inviting people in to encounter Jesus, with an emphasis on mercy and on joy.

"One of the key places of encounter is in the family.  I look forward to his engaging with families in Croke Park and to his messages for all of us.

"I look forward to the events of the coming week.

"It will be good for the Church and good for Ireland.  When you hold open a door you never know what will happen.

"Pope Francis could surprise us all, such is his radical faith.