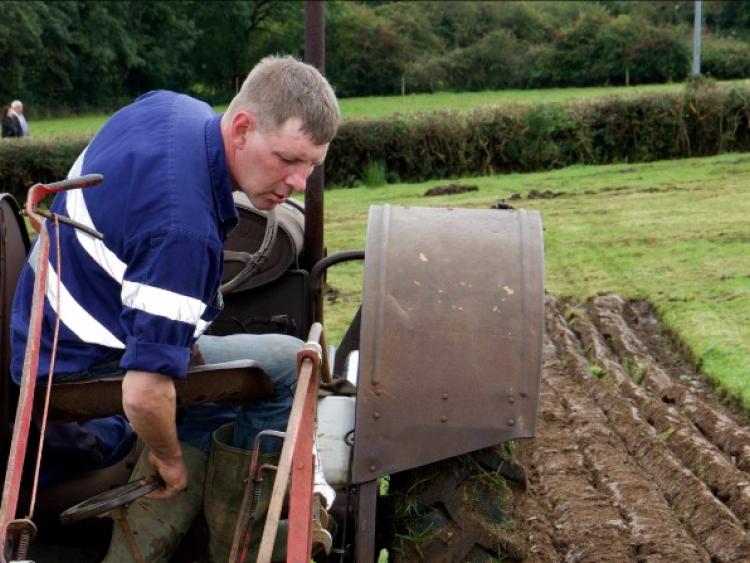 Seamus Crossan gets into the thick of the action at last year's Colmcille Ploughing and Heritage Day Photo: Michelle Ghee.

It’s a case of 20 years not out for the organisers behind the Colmcille Ploughing and Heritage Day as the popular festival makes its eagerly awaited annual return this Sunday (August 19).

As is so often the norm with its staging, a comprehensive itinerary of events have been lined up to keep both young and the not so young thoroughly engrossed throughout the course of the afternoon.

ALSO READ: Ploughing all the way to Colmcille

It all gets underway courtesy of a vintage parade which sets off from its perennial starting point at the community centre after 10:30am Mass as it makes its way to the site field.

Following on from the success of last year’s showcase, which was held on the lands of Sean and Margo Campbell, the venue for this year’s spectacle is the farm of Bernard and Ann Reilly, Dunbeggan.

And, while the occasion is not your stereotypical ‘show’ in the broader sense of the word, the day itself is one which serves up a unique sprinkling of attractions which are rarely often seen or experienced at other events of its type.

At the top of that list is a car and tractor vintage display, penalty shootout competition.

If that’s not your cup of tea, why not take in the charming delights of some rare and not so rare animals by virtue of the Enniskillen based Corbally Mobile Fun Farm.

They include the likes of miniature horses, pygmy goats, giant rabbits, reindeer and meerkats, creatures you would rarely see in the zoo never mind the rolling hills of north Longford.

Another attraction is the eye catching presence of Cork based outfit Xtreme Fun who will bring their incomparable all action, exhilarating and adrenaline packed array of activities.

Outside of those more unconventional of attractions are the more tried and trusted crowd pleasers typified by the likes of more traditional vintage car displays, craft and trade stands, livestock display, home baking alongside the hugely popular tractor, loy and horse ploughing exhibitions.

If those exertions have taken their toll why not opt for some well earned respite in the hospitality tent where a thirst quenching cup of tea or coffee can be had as well as some other appetising treats.

Committee member Micheal Shaughnessy said there was much to get excited about with the event very much lending itself to a theme that’s geared towards the family unit.

“It’s a family fun day, which really does draw people out and it has seemed to work with the crowds that have increased nearly every year,” he said.

And based on what’s being lined up ahead of next Sunday, the 2018 version could well take some beating.