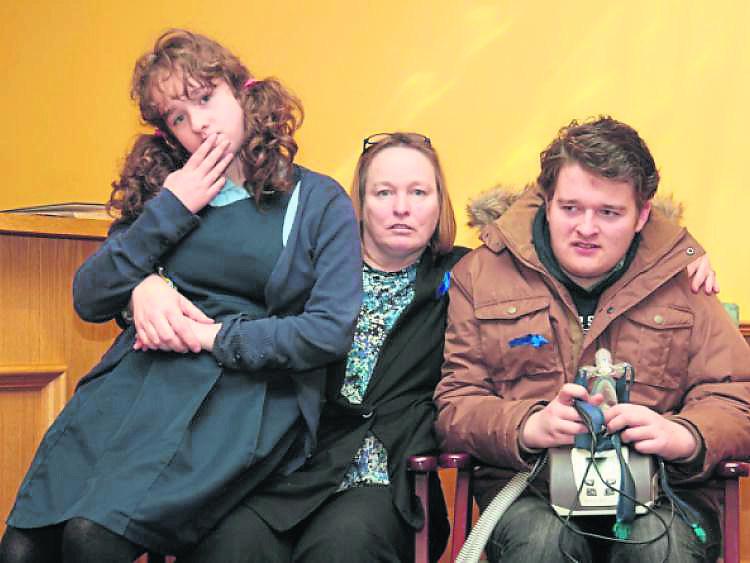 Bridget Sullivan with her daughter, Fiona, and her son James. Photo: Shelley Corcoran

In 2009, the World Health Organisation (WHO) caused global panic with warnings of a swine flu pandemic, prompting the Irish government to sanction the Pandemrix vaccine for use in Ireland, offering its manufacturer a full indemnity in the process.

The vaccine has since been linked to the sleep disorder, Narcolepsy, and, last week, the Irish Independent revealed that the HSE released stocks of the same vaccine to use during a shortage of the usual flu jab - meaning some children received a double dose of the vaccine.

And, while this was shocking news to much of the rest of the country, it certainly wasn't news to one local mother, Bridget Sullivan, who has been battling with the Government for eight years after her son, James, fell victim to some of the other deadly side effects of the controversial jab.

It was January 22, 2010, when James woke up, just like he did any other day, completely unaware that his life was about to take an irreversible turn.

“We had no reason to question the vaccines. We always took our vaccines and we trusted the system,” said Ms Sullivan, who sent her children to school that day to get the Pandemrix vaccine.

“Within hours, he came home. He wasn’t feeling great. That night, he started having seizures, going stiff as a board. His eyes were rolling. It was frightening.

“We didn’t know what to do. It scared the living daylights out of me and we didn’t have anywhere to turn to.

“Probably what helped us get through that night was I had some anti-allergy things and I managed to get that into him. I had to stay up the whole night holding him.”

From that day on, nothing was the same for the Sullivan family. Bridget wrote to the European Medicines Agency (EMA) and the HSE and got no answers.

But, she said, the EMA got back to her with a link to the vaccine insert, which listed all of the side effects - one of which was Encephalomyelitis, which is linked to a variety of sleep disorders, including narcolepsy.

And things were increasingly bad for James, who tore his way through seven mattresses in his sleep.

“He clawed holes in the wall. He couldn’t breathe,” Bridget recalled. And the worst thing was that she was told all of this was psychological.

“We went to two neurologists who told me that the lesions and punctures in the brain of someone that age was normal and that I shouldn’t be asking so many questions and that my family needs psychological help.

“Nobody wants you to question the vaccines. They said it was just coincidental.”

The prognosis, as it stands, isn't good for James, and his family are desperate to get him not just medical help, but acknowledgement from the HSE that his problems were caused by the swine flu vaccine.

As well as Encephalomyelitis, James suffers from Sleep Apnea, Chronic Fatigue Syndrome and Borellia - all caused by the shot, his mother claims.

“I also know that at some stage James will get early onset dementia,” Bridget explained as she started to get emotional.

“And that’s frightening to think about. I get scared. He is determined to try and do his best and try and live his life. Several times here he wanted to commit suicide.

“My son nearly died and every day I have to live wondering is he going to be alive today. And I’m doing everything I can to make him live life. I never know if I’m going to go in there and find him dead.

“And it’s scary,” she continued. “When you see him out there… he’s pushing himself. He’s determined not to give up and he’s got his list of things that he’d like to accomplish or that he’s planning in case something does happen.

“I don’t want to lose my child and I know that so many people out there may have already lost children… how many have lost kids to suicide because maybe they had the shot or some other shot and they reacted and were then told that it was psychological and were put on psychological drugs?”

But James is one of the lucky ones, she added - or at least as lucky as he possibly can be in this bleak situation - because he's alive.

But the family has struggled financially, almost losing the house in the process. On top of that, James' father has had to move to and work in New York in order to get him the medical cover he can't access here in Ireland.

“I think that if a person gets an illness that there’s a vaccine for, you’ll get more sympathy and help than if you react to a vaccine. And that’s the bottom line,” said Bridget.

“It’s the parents on the ground floor dealing with this every day who need help and who need to be acknowledged.

“If you’re going to push vaccines, why can’t you test people first to make sure that they can take the vaccines?

“I used to be for vaccines and I had no problem with people who didn’t take vaccines.

“Now I’ll be labelled an anti-vaccer and I don’t care. I’m an ex-vaccer.”