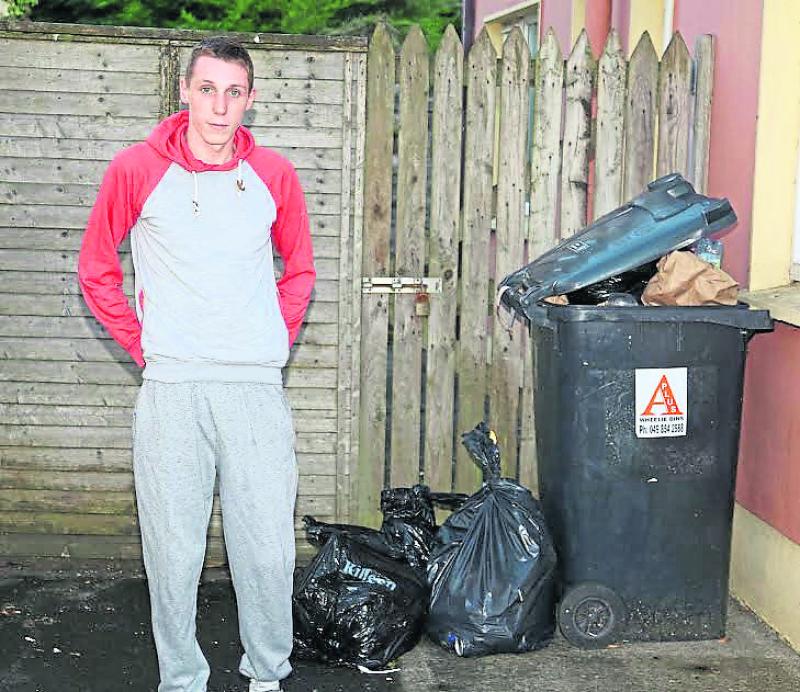 Conor Doyle says he was let down by Green Energy’s bin collection service in Newtownforbes and his rubbish is now piling up at his home. Photo: Shelly Corcoran.

Angry householders in the Newtownforbes area of Longford are up in arms this week after it was claimed waste management company Green Energy had left them without a bin collection despite having paid for their waste removal.

Conor Doyle who lives in the Woodview estate in the village said that he put his bin out as usual two weeks ago with the pre-paid tag, but the company failed to collect the waste.

Mr Doyle said he initially thought that the error was due to roadworks that were being carried out, but he later discovered that Green Energy had withdrawn its service altogether from the village.

“The woman in Bell’s told me that Green Energy had stopped operating altogether in Newtownforbes; apparently they had put leaflets in the door of some of the houses but I never got any and therefore had no idea about what was going on,” he continued, before pointing out that when he tried to get his money back for the Green Energy tags on the bin, he was told that would not be possible.

Meanwhile, some residents left their bins out in the hope that Mulleadys would pick up where Green Energy left off, however the bins remained unemptied because payment had not been forthcoming to the Drumlish waste management company.

“Mulleady’s told me that they wouldn’t collect my bin because it was full and it would need to be emptied first,” Mr Doyle added.

“I have bags of rubbish lying around my house at the moment as well as the full bin; in fact there are a number of full bins out around the village and residents are starting to get really annoyed over the whole thing.”

Speaking to the Leader, Niall Mulleady said the company had no difficulty taking on the customers in Newtownforbes, but like everybody else that availed of its service, they too would have to pay for bin collections.

“The big problem is that those people have already paid money for the Green Energy tags for their bins in the local shops and some feel that we should collect their bins without paying us; we are being expected to lift the bins for free and that is not going to happen,” Mr Mulleady added.

“There are issues over refunds for the Green Energy tags and that is what people are annoyed over.”

The local manager said Mulleadys had no difficulty whatsoever taking on new customers in the Newtownforbes area and even alluded to the fact that some of them were in fact “original customers” of theirs.

“The fact of the matter is we will not be collecting bins for free - everybody has to pay for the service we provide - all they have do is sign on and pay the money like everyone else.”

In a statement to the Leader, Paul McCann, Green Energy said the company had no problem reimbursing customers that bought tags but didn’t have their bins collected.

“Anybody that needs a refund should ring the company, post in the tages and we will refund them,” he added, before pointing to the fact that the company was servicing three customers in Newtownforbes and it was no longer financially viable to continue.