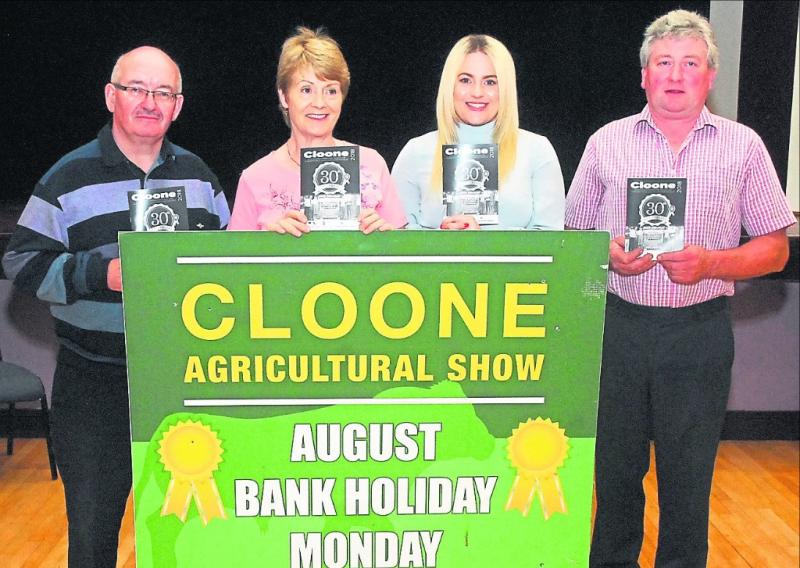 Cloone Show this year is striding towards its 30th anniversary at a very steady pace.

This huge agricultural and social event has over 250 classes and numerous special attractions with the emphasis on something for all the family.

This event has enjoyed huge crowds over the years and has a reputation for favourable weather.

When the Show was launched, helium balloons were used as a marketing tool for promotional purposes. However since the turn of the Millennium social media is marketing that gets to a wider audience.

However the local press favouring press and local radio are still assisting the event and the committee appreciate their contribution over the three decade period.

Also acknowledged is the major contribution of previous committee members team workers, sponsors and donors of financial and material prizes, support for fundraising events, the parish development association for the use of the school grounds in the early years and the Beirne family for the use of their venue which is one of the finest showgrounds in the country.

As well as committee personnel changes other notable ones were the change of venue, the increase in prize, money and attractions as well as the current use of the digital disc which eliminates the “pen and paper” system of collecting show data and results.

The show will be officially opened by local man Gerry McGovern, President of the GAA Connacht Council at 3pm.

Indeed Gerry has been associated with the show since it was launched in 1988.

Starting off in the horse section class 1 is for Irish Draught Mares with foal or Stallion owners cert with a prize fund of 200 euro sponsored by the Irish Draught Breeders Association.

Overall there are 27 horse classes and five classes for style and appearance which is always popular.

There is also 600 euro prize money for best pair of penned male and female calves born after November 1 2017.

There is also a prominent area for sheep and goats with a total of 16 classes.

The numbers in pets and poultry is increasing annually.

The dog show is also a major attraction with 17 classes and 865 euro in prizes.

In the marquee areas there are over 125 classes covering cookery, crafts, home industries, faror and garden produce, flowers as well as junior art, crafts cookery and handwriting.

Quarter of a century for Cloone Show