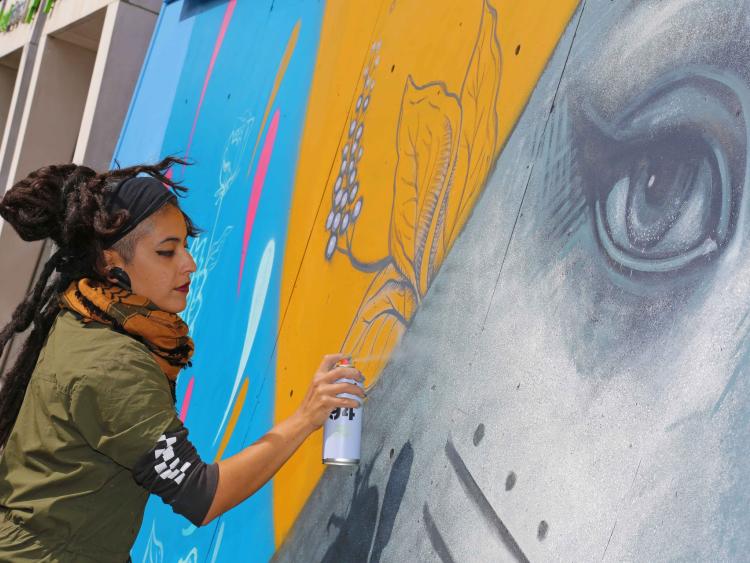 Kathrina Rupit spray paints one of a number of eye catching pieces of art that emerged from this year's hugely successful Cruthú Festival.

Kicking off on Thursday, July 26 last, a multitude of music, drama and artistic events took place over the four-day festival, as well as workshops, street performances and children's entertainment.

And, a simple walk through the town will unveil numerous murals, including the one pictured, which is situated on Ballymahon Street and was painted by talented street artist Kathrina Rupit.

Pop-up art galleries were found in vacant retail lots around the town; street performers made their way to the Market Square to attract the crowds; there was even an 'urban forest' that popped up, comprising a number of colourful trees made from plastic and various other materials.

Musical events, such as a spectacular acoustic set by State Lights in the Longford Arms Hotel on Thursday night, and a highly-anticipated performance by members of Kíla and friends in St John's Church on Sunday night, went down a treat.

A silent disco in the Temperence Hall was very well attended on Saturday afternoon, while a sneak peek at what's to come in the Still Voices Short Film Festival later this month brought a number of avid cinema fans to the Council Chambers.

Downstairs, in the Market Square, there were a number of performances of Japanese Drumming, which attracted crowds of passers by. See www.longfordleader.ie for a video.

Perhaps the event that drew the most attention over the weekend, though, was 'Dr Finbar Platypus presents The Carnival of Adolescent Antics', which took place in a vacant space in the town.

Music could be heard from all over the town, drawing visitors to the vacant lot beside Specsavers, where they could see what all the noise was about.

And they weren't disappointed when they arrived at the colourful, fun-filled space created by young people from around Longford.

Students from Templemichael College had built furniture out of pallets for the public to sit on and enjoy while members of School of Rock performed on a stage, and 16 art students from Secondary schools around the country worked hard on their individual murals.

The result was a spectacular space, bursting with creativity and talent.