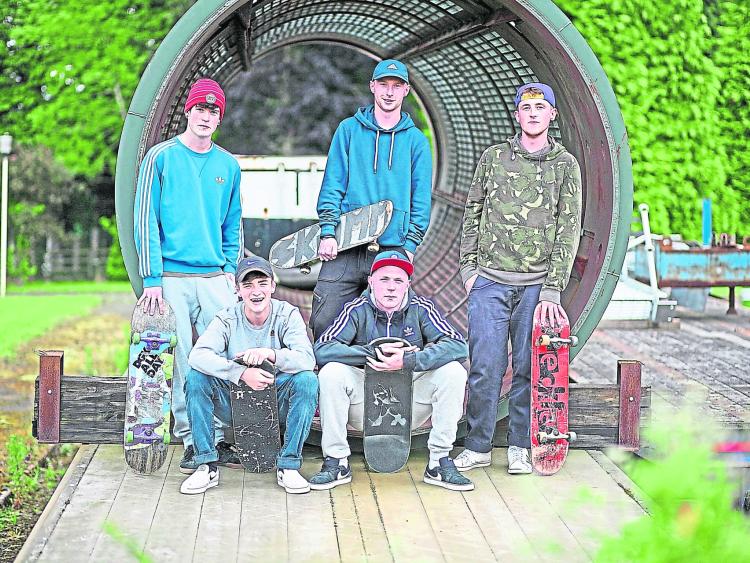 Some of the young people in Longford who would like to see a skate park in the town. Pictured are: Daniel Keogh with Ryan Kelly, Tadhg Barden, Conor O'Keefe and Deane Nulty. Photo by Shelley Corcora

A skate park could be in the works for Longford town according to the Longford Integrated Action Plan for Connolly Barracks and the Northern Quarter.

The Plan was produced as part of the URBACT Military Assets as Public Spaces (MAPS) project and details a number of potential plans and ideas for the old barracks site.

“The council have included a skate park in their plan and now consultants are going in and looking at the council plan to decide what can and can't go ahead,” said Sinéad Larkin of the Longford Unite Project and the Longford Needs a Skate Park group.

“We're trying to make sure the skate park goes ahead.”

There are many Longford kids that go around the midlands to different skate parks to practice and take part in competitions and having a similar amenity here in Longford could only benefit the county, according to Ms Larkin.

“Longford is one of only three counties without a skate park,” she said.
“We're lacking amenities for young people. If we had a skate park in Longford, it would bring people to the county.

A submission is currently being put together in favour of the skate park, detailing why Longford should have a park and what benefits it would bring to the county. There's also a petition online.

“People really need to show their support and sign the petition,” said Sinéad.

“Get on to your local councillors and help us to make this happen.
“Even people who have left the county are looking for a skate park in Longford.

“It would just give something different to do in the town to the kids who don't like GAA,” Ms Larkin concluded.

To show your support for a skate park in Longford, visit the Longford Needs a Skate Park page on Facebook and sign the petition.
The full Integrated Action Plan can be viewed on www.longfordcoco.ie.