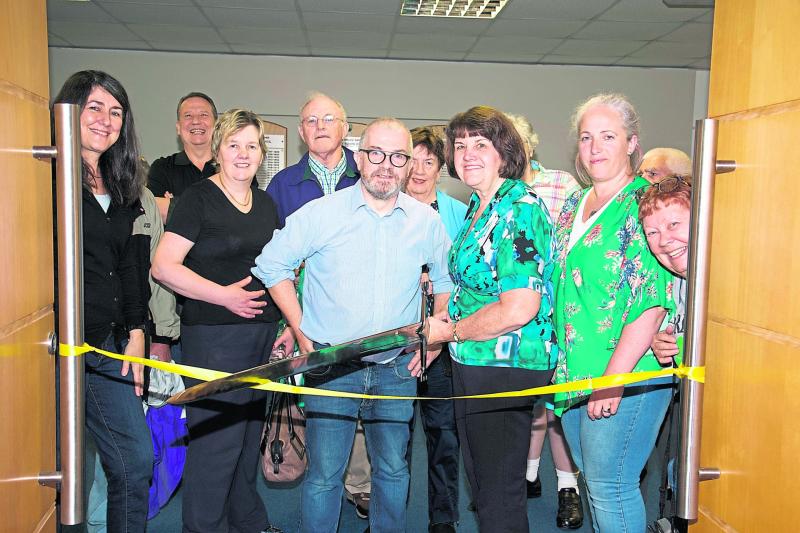 Swinging the Farrell Clan sword: John Farrell and Beth Farrell-Schild, who opened the Clan Reunion, with Anna Delaney and all the Farrells.

Farrells from all over the world were welcomed to the opening exhibition of the Silver Jubilee Farrell Clan Rally in the Longford Municipal District Council Chamber on Monday.

Farrell memorabilia, souvenirs from previous rallies and other fascinating historical objects were on display, as well as stories from Anna Delaney’s upcoming book ‘Finding the Farrells’.

This exhibition marked the beginning of the Silver Jubilee International Farrell Clan Rally 2018, a quadrennial event that allows people from all over the world to come to Longford and connect with their Farrell roots.

Chairperson John Farrell was delighted to see so many people on the first day of activities, with more to come later, and was proud to present the publications, memorabilia and photographs that were on display.

He also thanked the committee for the hard work put in to make the rally happen.

Beth Farrell-Schild, coming from Pennsylvania, Philadelphia, spoke to the Leader about her experiences with the rallies.

After hearing about the Farrell clan online, Beth first came to one of the clan’s monthly meetings in 2002 while touring Ireland and has since gone to the last five rallies.

“The people that run the clan here are wonderful. I feel like they’re family now after coming here so many times.

“I think they should be commended for how much effort they go through to let everybody know about all the Farrells and everything that’s gone on.”

Another Farrell in attendance was Maria Claudia Carbone-Farrell, who travelled to Longford from Argentina.

She has visited Longford before, but this was her first time attending the rally.

“I like the sightseeing. I like St Mel’s Cathedral; it’s a wonderful, beautiful place. Last time, I had just a few hours, so I think I have to go around to see a bit more of the place. It’s history,” remarked Maria Claudia, who is the granddaughter of former Argentine President, Edelmiro Julián Farrell.

She talked about how difficult it was to find records of her ancestors since the registry was burned. She hopes to find more information on her trip.

Former chairperson Robert Farrell spoke to the Leader about the history of the Farrell Clan Rallies.

The first Longford meeting took place in the Annaly Hotel in 1992. Since then, there have been 19 rallies across the world, including a commemoration for the 1000th anniversary of the Battle of Clontarf.

Robert also said that the rallies were an important opportunity to remember founding clan members who have passed on.

Other events taking place this week include tours of North and South Longford, a visit to Corlea Trackway Centre and a workshop with Martin Morris on researching your family.

The rally concludes on Saturday at 7pm with a banquet in the Longford Arms Hotel, with special guest Ceann Comhairle, Seán Ó Fearghaíl.