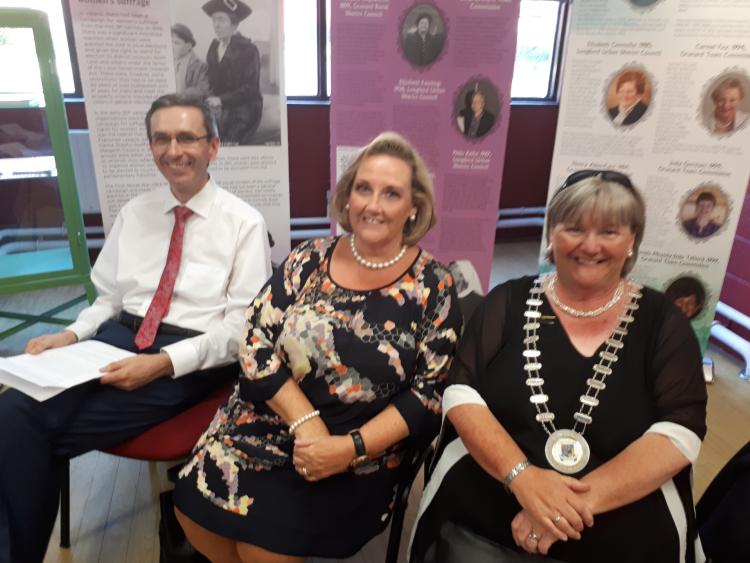 A wonderful celebration of local women’s contribution to public life in Co Longford over the last 100 years took place at Longford County Library this evening.

Speaking this evening, the Cathaoirleach said the exhibition was being held to mark the centenary of the granting of the vote to women in Ireland.

“As we look back on it all now, it is hard for us to understand why it took such a long campaign to achieve something that we now see as a basic right,” Cllr McEntire said, before pointing out that while change happens, “people have different ways of looking at things in the past”.

“As we look at this exhibition we see the women that have contributed to Longford in so many ways and we tend to take some of them for granted.”

Meanwhile, the Cathaoirleach of Longford Co Council went on to say that the number of women who served as elected representatives includes many who we are all very familiar with.

“I myself know and have served with quite a few of them,” he added.

“Outside of politics the other groups and organisations that are mentioned show the breadth of women’s involvement in our history and in our communities.”

He added,  “All of us have heard of the activities of Cumann na mBán and the events that took place 100 years ago; today Co Longford benefits gratefully from the continuing work of groups like the ICA which is going from strength to strength; Longford Women’s Link and the Sisters of Mercy.

“Much of the work these women have done and do is free and done without the intention of getting recognition and this evening we celebrate, and recognise this work and thank all the people who have been involved.”