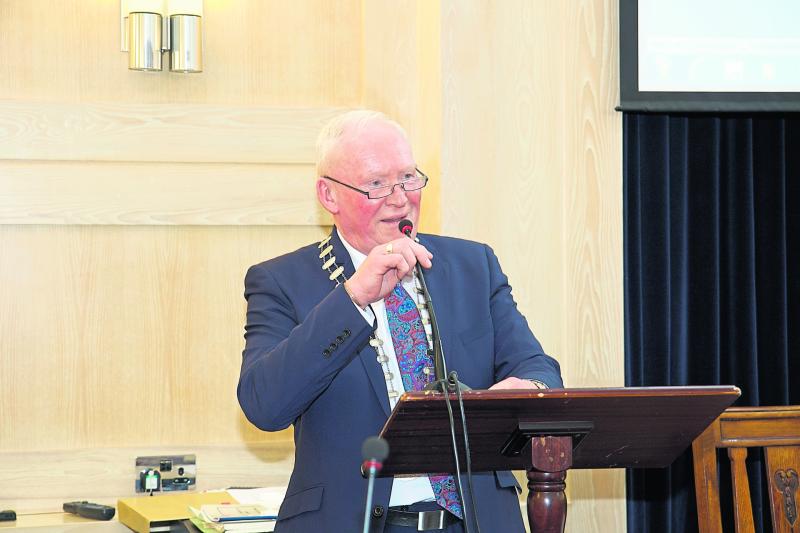 One of the longest serving local area representatives in Ireland, Longford’s Cllr Luie McEntire (FF) has been elected Cathaoirleach of Longford Co Council.

And in an unusual move during such an election, Cllr McEntire’s proposal went unopposed by both the Fine Gael side of the house and among the Independents during proceedings at Arás an Chontae last Thursday night.

Meanwhile, Cllr Mae Sexton (Ind) who herself has gained an esteemed reputation in both the local and national political arenas having served the people of Longford for two terms in Dáil Eireann, was elected Leas Cathaoirleach.

During his acceptance speech, Cllr McEntire said he was honoured to take up the role, a task he last undertook 32 years ago, back in 1986.

“Today is a memorable day for me and I feel very, very happy to be in this position,” Cllr McEntire told the large crowd that gathered to wish him well.

“I was last elected chairman in 1986; I was the first Dromard man ever to hold the chain, so 32 years later it is great to be back in that position again.”

Cllr McEntire went on to say that the people of north Longford had re-elected him on nine consecutive occasions and he would be forever grateful to them for that support.

“It is marvellous to think that the people have put that trust in me over the years; Dermot Hegarty released a song one time - 21 Years - which is a long time, but 31 or 32 is a lot longer,” the new Cathaoirleach quipped.
“And yet when I look back it doesn’t seem that long!.”

The local area representative in north Longford then went on to thank his wife Margaret, his five sons and daughter Louise for all their support through the years.

“On the outside it might look great, but there is a lot of hard work to be done; I held down a full time job throughout my political life and I was away from home a lot of the time.

“My wife Margaret has been a fantastic support to me; she held the fort at home, looked after six children - which wasn’t easy - and I think this chain is as much hers as it is mine.”

Cllr McEntire’s loyal supporters and campaign staff also got a mention!
“I want to thank you all,” he smiled, before pointing to the efforts of his campaign staff.

“I have workers still with me who started off with me back in 1979 and they have continued to be on my team,” the Dromard man continued.

“They worked hard and nothing was a problem for them when it came to election time; to you I want to say thank you for all the support and work that you have done for me.

“We had our ups and downs, but despite it all we achieved our goal and got the candidate elected.

“And without the people of Drumlish, Ballinamuck, Dromard, Colmcille, Killoe and now the new Granard area, I wouldn’t be standing here today, nor would I have served in politics for 39 years.

“I want to thank the people of the north Longford area for electing me consistently at every election that I put my name forward for; when you are fighting elections or conventions it’s not easy and you never know what way it will all go!.”