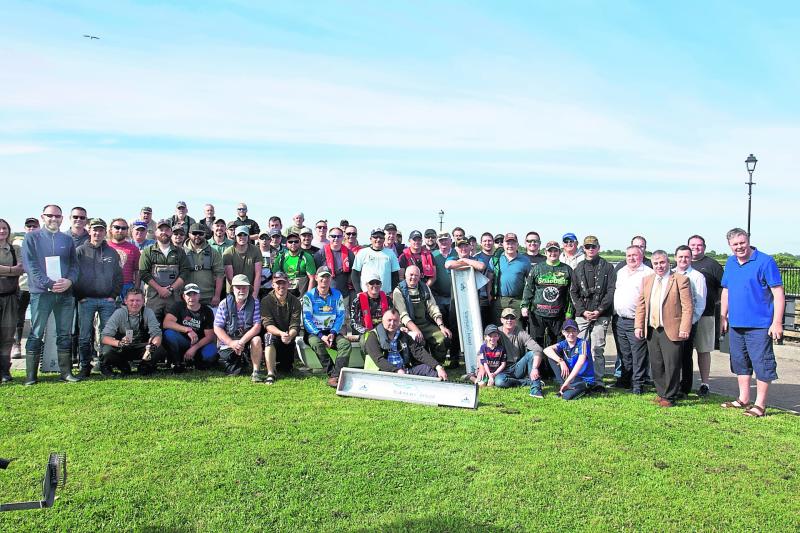 Angling enthusiasts gather along the shores of Lough Ree in Ballyleague for the International Pike Classic Festival. Photo: Michelle Ghee

If there was one place to be at the weekend in the midlands and west, it had to be Lanesboro/Ballyleague where the much anticipated two day International Pike Classic angling festival kicked off with gusto on Saturday morning along the shores of Lough Ree.

The atmosphere was electric and the locals were out in force to welcome anglers, ministers, TDs and fishing enthusiasts alike to the picturesque south Longford area.

Local area representative in Lanesboro, Cllr Gerald Farrell said the Festival was a great occasion and one for everyone to enjoy.

He also pointed to the wonderful weather the country is experiencing at the moment and its significance to proceedings!

“It’s a fabulous morning for this event and the boats will be heading out now and the anglers will take up their positions for what will hopefully be a great day’s fishing,” added Cllr Farrell, before pointing out that 73 boats were entered into the competition.

“There are 146 anglers here today from all over Ireland and Europe and it really is fantastic to see this happening here in Lanesboro/Ballyleague.”

Meanwhile, the Festival saw the competitive side of proceedings run for two days; the fish were measured accordingly and the winners were announced in the Shannonside town on Sunday evening.

And, there was lots of celebrating and a carnival like atmosphere in the locality to mark the occasion!
Cllr Farrell also paid tribute to the Lough Ree Angling Hub who in conjunction with the Camlin & District Anglers, he added “has been instrumental in bringing this festival to fruition”.

He continued, “This festival also serves as a huge boost to the social and economic well-being of Lanesboro and Ballyleague; anytime an area can get 146 fishermen into it, that is fantastic - the restaurants, shops and other businesses will benefit from this.”

Minister Kevin ‘Boxer’ Moran was also present along the shores of Lough Ree on Saturday morning.
As a keen angler himself, the Minister pointed to the importance of communities rallying together, and utilising to the maximum, the infrastructure and tourism potential that surrounded them.

He also added that he remains “very hopeful” that his invitation to Prince Charles last weekend to visit Longford and Corlea will stand true!

“This festival is great for the promotion of this area and the number of fishermen here is great to see,” he added. “There are a lot of young people involved too and that is fantastic; from a tourism point of view this is brilliant.”

Ciarán Mullooly, meanwhile, spoke of the financial cost of running the International Pike Classic and he thanked all those whose contributions and support ensured the event would take place again this year.

“We want to thank the principal sponsors Roscommon Co Tourism Committee and Roscommon Co Council; Longford Co Council, Bord na Mona, Inland Fisheries and Longford Community Resources Ltd (LCRL) who have come on board this year under the LEADER programme,” he added, before pointing to the fact that the event was a follow-on from the 2016 World Championships which were a huge success in the locality.

“We are building on that now; numbers are up so there is lots to look forward to.”