International Pike Classic 2018 two day festival sees over 100 fishermen from all over Ireland and Europe take to the waters to clinch those much coveted angling prizes! 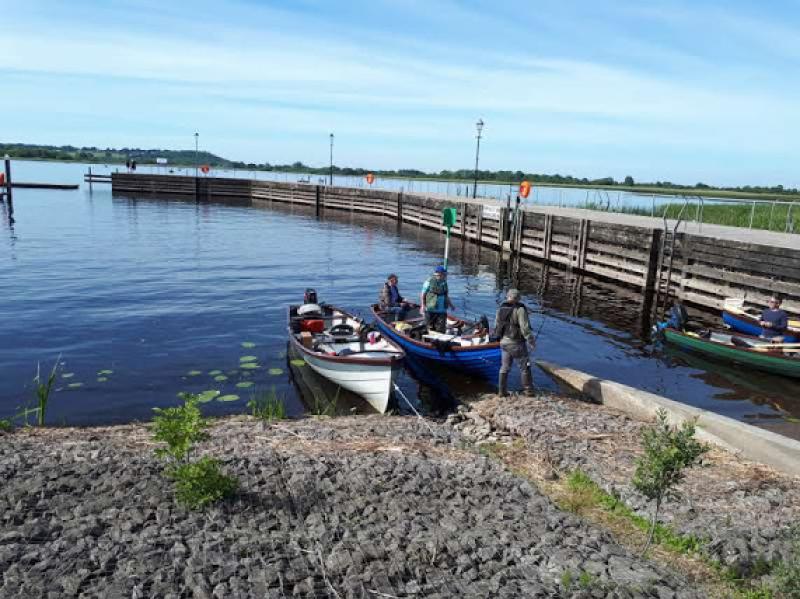 Anglers get organised for their two day fishing festival at Lough Ree in Ballyleague this morning.

If there’s one place to be this weekend in the midlands and west, it has to be Lanesboro/Ballyleague where the much anticipated two day International Pike Classic festival kicked off with gusto this morning along the shores of Lough Ree.

The atmosphere was electric and the locals were out in force to welcome anglers, ministers, TDs and fishing enthusiasts alike to the picturesque south Longford area.

Local area representative in Lanesboro, Cllr Gerard Farrell said the Festival was a great occasion and one for everyone to enjoy.

He also pointed to the wonderful weather the country is experiencing at the moment and its significance to proceedings!

“It’s a fabulous morning for this event and the boats will be heading out now and the anglers will take up their positions for what will hopefully be a great day’s fishing,” added Cllr Farrell, before pointing out that 73 boats were entered into the competition.

“There are 146 angles here today from all over Ireland and Europe and it really is fantastic to see this happening here in Lanesboro/Ballyleague.”

Meanwhile, the Festival will see the competitive side of proceedings run for two days; the fish will be measured accordingly and the winner will be announced in the Shannonside town on Sunday evening.

And, no doubt there will lots of celebrating and a carnival like atmosphere in the locality to mark the occasion!

Cllr Farrell also paid tribute to the Lough Ree Angling Hub whom he added “has been instrumental in bringing this festival to fruition”.

He continued, “This festival also serves as a huge boost to the social and economic well-being of Lanesboro and Ballyleague; anytime an area can get 146 fishermen into it, that is fantastic - the restaurants, shops and other businesses will benefit from this.”

Minister Kevin ‘Boxer’ Moran was also present along the shores of Lough Ree this morning.

As a keen angler himself, the Minister pointed to the importance of communities rallying together, and utilising to the maximum, the infrastructure and tourism potential that surrounded them.

He also added that he remains “very hopeful” that his invitation to Prince Charles last weekend to visit Longford and Corlea will stand true!

“This festival is great for the promotion of this area and the number of fishermen here is great to see,” he added.

“There are a lot of young people involved too and that is fantastic; from a tourism point of view this is brilliant.”

Minister Moran also pointed to the fact that while community spirit was dormant for a number of years, its rise in recent times was “heartwarming”.

“For a few years there we were buying fancy cars and focusing on the materialist side of things but when I travel around the country these days, that is all gone,” the Minister smiled.

“Now communities are coming together and making the most of what they have; there are great things happening not just here in Longford and Roscommon, but all over the country as well and that is very, very positive.”

And speaking of  community spirit, that will no doubt be out in force tomorrow too when the locals will once again rally together to raise funds for local man David Farrell who has been diagnosed with a terminal illness.

A family fun day and BBQ will be hosted along the banks of the River Shannon to raise awareness of David’s plight and to provide an opportunity for the people of the area to gather together, chat and have some fun!

For more on this story, see next week’s Longford Leader - on sale Wednesday!