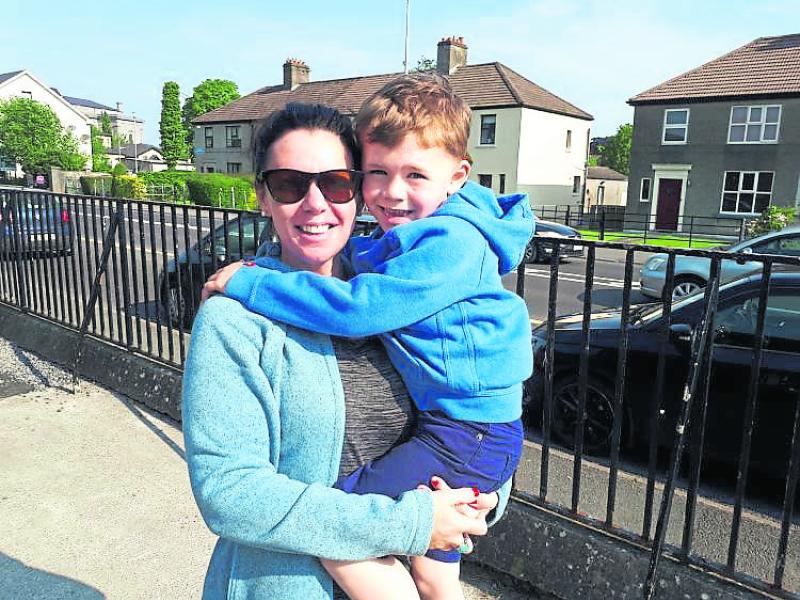 Karen Reilly with her son Mack at St Joseph's National School Polling Station after casting her vote in the referendum last Friday morning in Longford town.

Results from last Friday’s referendum on whether or not to remove the 8th Amendment from the Constitution of Ireland saw 58% of the Longford/Westmeath electorate vote for change.

From very early, on voting day here in Longford, it became clear that the Yes camp was building momentum and when that consensus was clarified on Saturday afternoon following the count, it was evident that the people of this county wanted change.

A number of voters, meanwhile, spoke to the Leader about the importance of the day and why they chose to mark the box in the way they did.

Many remarked upon how this referendum marked an important day not just for the women of Ireland but also for society as a whole.

Karen Reilly who lives in Ardagh brought her son Mack to the polling station in Longford town on Friday morning.

She said that the significance of the day could never be underestimated and she urged everyone to exercise their democratic right in the referendum.

“This is an important day and everyone needs to come out and vote,” said Karen.

“I have my son with me and I think this referendum is important for his future as well; we should be able to take care of our own women in our own country with compassion, care and dignity and that is not happening at the moment.

Meanwhile, and according to the latest statistics on those choosing to terminate their pregnancy in the UK, 16 Longford women travelled to Ireland’s nearest neighbour to obtain an abortion last year.

The local electorate told the Leader that Irish women deserved to be able to make a decision like that in their own country.

“I voted Yes because I think that women should have the right to make the choice for themselves when they are pregnant,” said Stephanie Coote.

“Women should have the right to make choices about their own body; it’s 2018 now and people need to move on.”

Ms Coote went on to say that it was unacceptable in this day and age, that any pregnant woman, regardless of her age, or circumstance, should have to travel to the UK for a termination.

“Imagine too a young girl that has been raped and having to get on a plane or a boat and leave her own country to deal with the pregnancy - it’s just terrible,” she continued.

“Women deserve to be cared for.”

“I’m actually pregnant with my third baby at the moment and I think that this referendum is very important not just for women, but for men, grandparents, everybody,” she added.

“I think everybody should be out voting because this is a very important referendum.

“I don’t think that women should have to leave their own country to deal with a crisis pregnancy, they should be looked after here in Ireland.”

Paul Delaney, meanwhile, said he voted because it was “an important day for the people of Ireland”.

“People need to come out and use their vote,” he smiled.

“This is a very important referendum for the people of Ireland and I think the women of Ireland deserve the right to have their own say on what they want when pregnant.”

Mohamud Hussein who is originally from Pakistan but now an Irish citizen living in Longford also voted.

He said he voted No.

“I voted No because that is how I feel,” concluded Mohamud.