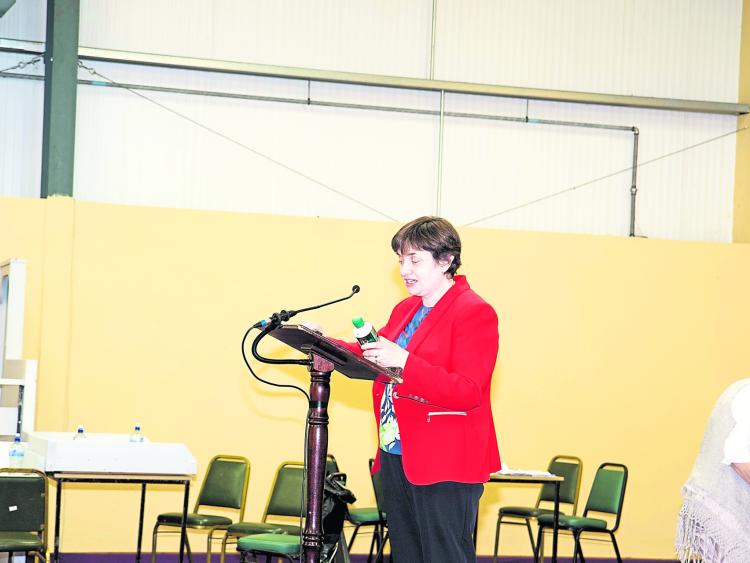 The eerie silence that rang around a near deserted St Dominic’s Community Centre in Kenagh said it all.

Barely a dozen counting staff was all that was left to greet Returning Officer Imelda Brannigan’s announcement at shortly before 4pm on Saturday that 58 per cent of Longford’s electorate had given their approval to delete the Eighth Amendment from Ireland’s Constitution.

Of course, the outcome was well flagged through the leakages of two exit polls less than 12 hours beforehand which indicated a landslide victory for those advocating a Yes vote.

Both The Irish Times, followed by RTÉ less than an hour later, contended the margin of victory could be as high as 68 and 69 per cent respectively.

A resounding triumph for the ‘repealers’ and one you would have thought might put the kibosh on any interest come count day.

Any preconceived conceptions quickly dissipated upon our arrival into Kenagh village at around 8:45am on Saturday.

Several youthful looking onlookers, armed with clipboards and sporting pink bibs could be seen huddling together outside the centre as we made our arrival.

Inside, the atmosphere was even more captivating with groups of eager toned tallymen and women engaged in quiet conversations in anticipation of counting getting underway.

When it did, recurring heckles of ‘Yes’, ‘Yes, ‘Yes’ could be heard as all 58 Longford boxes were opened, giving further weight to what the exit polls had been speculating.

The one dampener perhaps was the fact turnout levels at 59 per cent were some five percentage points or so behind the national average.

Then, at around lunchtime, came whisperings that Granard was going to ‘do a Donegal’ and vote against the tide by registering its desire to see the controversial Eighth Amendment retained.

A town perhaps with more reason than most to cast a discerning eye on proceedings, the tragic circumstances surrounding the death of Ann Lovett over three decades earlier was one which had attracted renewed publicity in the lead up to last weekend’s public ballot.

Ann was the 15-year-old schoolgirl who died alone giving birth to a baby in a grotto in the winter of 1984.

Had she lived she would have celebrated her 50th birthday last month.

It was a consciousness certainly not lost on those within St Dominic’s Hall at the weekend and to the glare of the national media who were keeping a watching brief of how the north Longford town would vote.

From a glance at the tallies taken, it would seem the ‘Yes’ side won out with only one booth at Granard National School returning a ‘No’ vote.

Ann’s sister, Longford Women’s Link CEO Louise Lovett tweeted her appreciation of how the campaign had been managed.

“Huge acknowledgement to all the Longford4Repeal activists for their commitment and time in running a respectful campaign and trusting Longford to say yes,” she said.

An assertive and endorsing declaration if ever there was one, it was a statement which many would undoubtedly concur with.

Yet, in spite of those warm soundings, evidence as to precisely how Granard voted remains unclear.

The Leader has been informed only one of its boxes, that of Granard National School ‘booth two’, can be deemed “100 per cent” in terms of its accuracy.

The remainder, some of which returned results which indicated only two or three votes in opposing directions, have been labelled “partial tallies”.

Whether it matters as to how individual polling stations voted is debatable nonetheless.

What isn’t is the unequivocal mandate the people of Longford has given messrs Varadkar, Harris et al to give women a voice, to give women a choice and more pointedly to give women a level of support that for close to three and a half decades has been sadly lacking.

Ireland has spoken, and now Longford has played its part in making that long yearning aspiration an achievable reality.