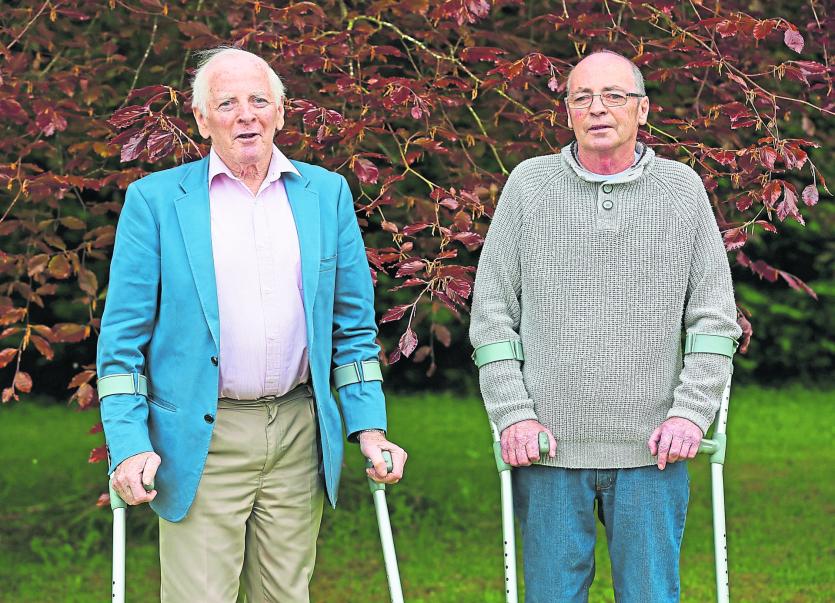 Little is known about the Cross Border Scheme at the moment, as was experienced by Legan brothers, James (better known as Max) and Tom Nulty, when they started looking into the scheme.

It was a meeting held in Mullingar by Robert Troy TD that informed them of their options after they had each suffered the frustrations of waiting lists here in Ireland.

And, after meeting Mary Aylward from MSC Eurocare, they put plans in motion to travel to Wales, where Tom underwent knee surgery, while Max had his hip done.

“I was told by the surgeon over there that my hip was badly worn,” Max told the Longford Leader.

“He actually showed me the x-ray. He had to grind down a lot of stuff to fill it up. It was bone on bone. My leg was nearly a quarter of an inch shorter because I was going around on it that long. It was all worn away.”
Tom's knee was also just “bone on bone”, he said: “That's why it was so sore.”

Both men have been recovering from surgery for three weeks now and were in great form on Sunday afternoon as they both crutched their way into the garden for a photograph.

Recovery is going well and they're looking forward to getting back to a normal pain-free life in a few weeks.

Last year, the pain the brothers suffered forced them to drop out of the walking club they set up approximately 15 years ago in the Legan area. The group now has about 25 members.

“I miss that a sight. It used to be great craic every Saturday morning,” said Max, while his brother nodded in agreement.

But, with their new joints healing well, the brothers have no doubt they'll be back in the club in no time.

“We might even be able to go to the bog this year - our annual holidays,” Tom laughed.

Very little is known about the Cross Border Scheme, as Tom and Max discovered when they started putting the wheels in motion for their own surgeries, with the help of Max's daughter, Kate.

“When dad went into the doctors, they thought that he needed to see a consultant to go to Wales for surgery,” Kate explained.

“But when I called up the Eurocare people, she said no.

You don’t need to see a consultant. All you need to have is a referral letter to Tullamore or wherever to say you need surgery. And that was easy enough to get.”

Next, the pair of men started to look into getting the money together. That involved a lot of phone calls to the Credit Union, Kate explained, and a lot of difficulty getting over ten thousand euros each.

Max was lucky to receive a Credit Union loan to cover the cost of his hip surgery, but Tom was a bit less fortunate with his bank.

However, with the help of his caring family, he managed to get the money together for his knee surgery.

The surgery date came up quite fast and the level of care and support that MSC Eurocare offered was what made the whole journey easier, the two men agreed.

“The girls that were in charge of it - Mary and Jennifer - they were great. There was nothing they wouldn’t do for you or nothing you couldn’t call them about,” said Max.

“They even organised physio for us here in Longford,” Tom added.
The two gentlemen were part of a group of seven travelling to St Joseph's Hospital in South Wales.

“We met the girls from MSC Eurocare,” Kate explained.

“They sent a taxi bus to the airport for us, met us in the hospital, gave us tea and sandwiches, and all of them had MRIs that day and a meeting with the consultant.

“They were told exactly what would happen and they were all booked for surgery for the next morning.”

Between Saturday and Wednesday, the consultant made sure to visit each patient regularly and, by Wednesday, everyone was ready to go home.

“It was a little difficult getting home because we didn’t have anybody with us on the way home and everybody was on crutches,” said Kate.

Tom nodded in agreement and said that having Kate there to help them with paperwork and to get around afterwards made the whole process so much smoother.

“You wouldn’t go on your own. We needed someone with us, big time,” he said.

The Cross Border Scheme has been an overwhelmingly positive experience for the Nulty brothers who are looking forward to getting back on their feet - minus the crutches.

“The hotel was great. I wasn’t going to come back at all actually,” said Max with a laugh.

His daughter agreed, adding that family members were also well looked after.

Best of all though, the price of the surgery will be refunded by the HSE.

“They say you’ll get the money back within 30 days,” Kate explained.

And, she added, Tom and Max felt it was important to share their story so that others, who aren't quite sure what the Cross Border Scheme is, could learn more.

“We’re just sorry we didn’t look into it in 2015. If we had only known about it, dad wouldn’t have suffered and he wouldn’t have been so badly deteriorated.”

For more information about the scheme, see www.eurocare.com.