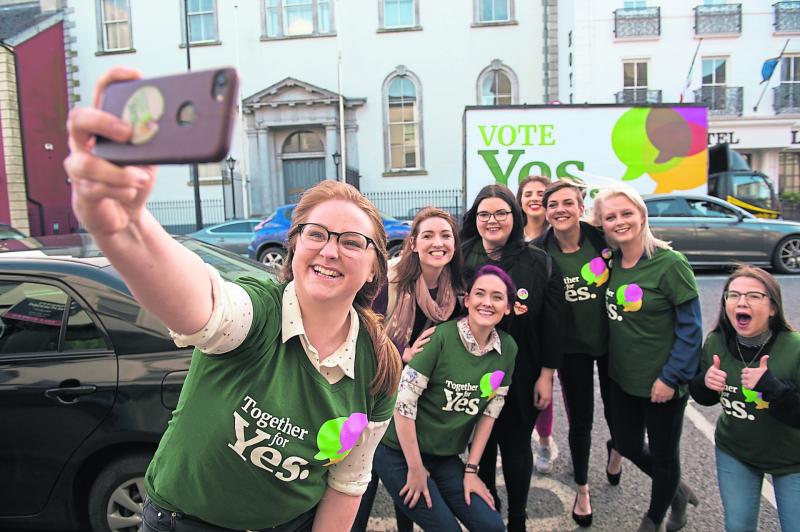 A hundred years after the foundation of the state, we’re still relying on England to sort out some of our problems, according to Dr Peter Boylan, who addressed the Longford Together for Yes campaign launch on Tuesday, May 8, last in the Longford Arms Hotel.

“It’s time, as a mature nation, to take responsibility for ourselves, demonstrate our compassion for women and care for women with compassion in our own country.

“And the only way we can achieve that is if you vote yes, get everybody you know to vote yes, and repeal the 8th amendment on the 25th of May,” he said.

The Longford Together for Yes campaign launch attracted a very large crowd of supporters and people looking to learn more about the upcoming referendum, which will ask the public of Ireland to vote on a proposal to change the Constitution of Ireland by repealing the eighth amendment.

Figures released by the UK Department of Health and Social Care reveal that 106 Longford women travelled to the UK for an abortion between 2012 and 2016.

“That flight to England doesn’t make you think any harder - it just makes it more lonely and it makes it more dangerous,” said local woman, Síona Cahill, who was one of the organisers of the launch.

“And of course, on top of that, the lack of access in our state affects marginalised groups more - and young people.

“All the 1983 ban did was make terminations here illegal and less safe, and drive our people abroad for healthcare. So this is our time to make that right.”

Also speaking at the event was Orla O'Connor, Co-Director of Together for Yes, who stressed the importance of a yes vote on May 25.

“We know that the people of Ireland want to treat each other with kindness and compassion, to ensure that women and families can access the care they need, when they need it. There is only one way we can bring about this change – by voting Yes on May 25 and removing the 8th Amendment.”

Perhaps one of the most powerful speeches on the night came from Dr Siobhán Donohue of Terminations For Medical Reasons (TFMR).

Dr Siobhán told the emotional story of her own trip to the UK for a termination, following the devastating news that her baby would not survive outside the womb.

Siobhán and her husband spent an emotional weekend in England, where she delivered her baby boy, TJ, and held him before his life slipped away.

One of the hardest things, she said, was that she and her husband couldn't bring their baby's body home to Ireland. The couple opted for a cremation, and their baby's ashes were delivered by a courier a few weeks later.

“It is no longer acceptable that this is how people in this situation are treated,” said an emotional Siobhán.

“On the 25th of May, we have an opportunity to bring home the care and compassion that women receive in English hospitals.

Obstetrician and Gynecologist, Dr Peter Boylan, has been the consultant facing women who have been through experiences like Siobhán's, but hasn't been able to do anything.

“These should be private matters,” he said, referring to Dr Donohue's retelling of a tragic time in her life.

“Siobhán and others shouldn’t have to come out and tell their stories like this. And hopefully after the 25th of May, they won’t need to.”

He then went on to address the amendment itself:

“The intended purpose of the eighth amendment was to keep abortion out of Ireland. That has clearly failed and instead has been responsible for causing serious harm to women - including death. It prevents doctors in this country from giving the medical care needed in pregnancy that women receive in every other European country apart from Malta.”

And it hasn't stopped abortion in Ireland, he added. It has just sent our women abroad for health care or forced them to order abortion pills online, which are taken unsafely without the necessary medical supervision.

“So we’re not voting yes or no on May 25th to abortion, because it already is here in Ireland. But we are voting for it to be regulated and safe or to continue having it back-street and unsafe,” he said.

“Abortion is a difficult issue. But the time has come for us to deal with it ourselves in Ireland. Every other European country has found a solution. We can’t rely on others forever. This is an Irish problem and we need an Irish solution.

“And the only way we can achieve that is if you vote yes, get everybody you know to vote yes, and repeal the 8th amendment on the 25th of May,” he concluded.