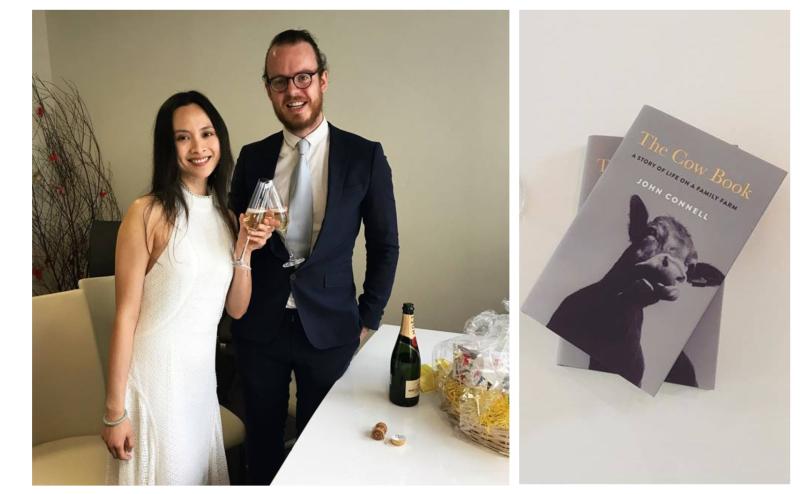 John Connell, the young Ballinalee farmer, who is the bestselling author of ‘The Cow Book’, has revealed on Facebook that he and his fiancée Vivian Huynh celebrated their marriage yesterday, Friday, May 11.

It has been a whirlwind number of months for John since the launch of ‘The Cow Book’ in March at Longford Library.

John posted on Facebook: “Eleven weeks in the bestseller list is great but getting married is even better.”

Vivian is from Australia and John previously revealed how they met while Vivian was working in a newsagency in Sydney. She has since made the big move from Australia to rural Ballinalee.

In a Longford Lives interview with the Longford Leader’s Jessica Thompson in April, John said, “Vivian is probably the most important person in my life and she’s moved to Ireland so we can be together after having a long distance relationship for three years. She’s an amazing person and I’m very lucky to have her in my life.”

He said the couple would be “jumping the broom” in May and true to his word they have.

As he posted on Facebook: “My fiancée and I tied the knot yesterday. This is Vivian from the book and she is a stunner.”

In his acknowledgements in ‘The Cow Book’, John described Vivian as ‘the best lady and love I know’.

‘The Cow Book’ is now available in New Zealand and Australia, while John recently signed an American deal.

He explained, “The book comes out in America next year, May 15 and will go under the new title The Farmers Son. A huge thanks to my agent and my new publishers. Onwards and upwards in what’s been the year of the Cow. Up the farmers!”