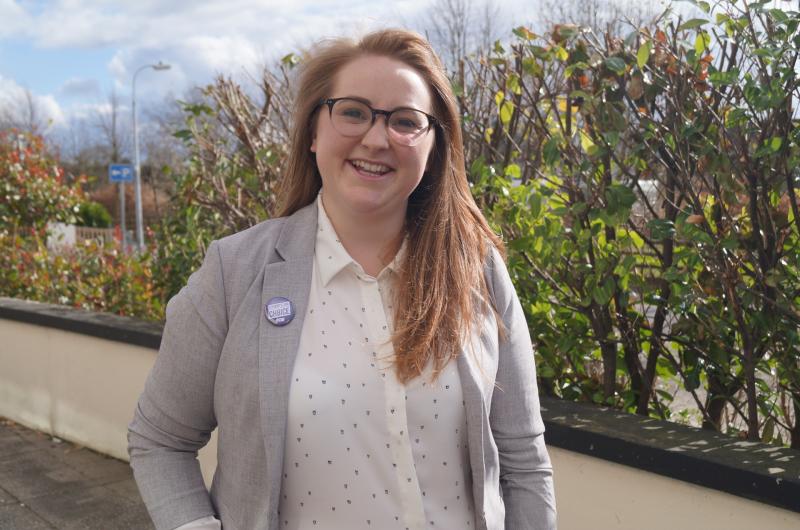 Success in student politics has become a yearly event for Longford native, Síona Cahill, who was last week elected to lead the Union of Students in Ireland for the 2018-2019 term.

Currently the Deputy President of USI and Vice President for Equality and Citizenship, the 25-year-old Carrickedmond woman is thrilled to be taking the helm of the organisation as USI President.

“I’m absolutely honoured,” she told the Longford Leader on Monday.

“We represent over 374,000 students across this island and I will make sure that they will be heard; we won’t be ignored!”

The Union works to improve and protect the lives of students every day on academic and social issues through campaigns, training and research.

The issues on Síona's agenda for the upcoming term include tackling third level fees and housing.

“It is imperative that we don’t put further burden on families or allow a loan scheme to be introduced in this country; that would be a disaster,” she said.

“College with cost of living costs an average of €12,000 a year, and Ireland has the second highest fees in Europe already.

“Education is a public good and has to be as accessible as possible. State investment has not matched the growing numbers in our colleges, and it’s not good enough any more.”

Before stepping up to the helm with USI, Síona served in Maynooth Students’ Union as the Vice President for Welfare and Equality for two terms.

She's also Chair of 'Students for Choice' and has spent most of her year organising students who are calling for the eighth amendment to be repealed.

Several times this year, she gathered over 1,000 students from across the country in rallies on the issue, launching the student campaign officially last week at USI Congress, while also assisting with Longford ‘Together for Yes’.

“It’s a student issue, but it’s also a local issue,” she commented.

“This referendum on May 25 is asking us what kind of Ireland we want for pregnant people. The majority of people want an Ireland that provides informed, compassionate healthcare.

“There are differing opinions, but at the end of the day, it should be up to the pregnant person to make the decision that is best for them, with their GP or medical practitioner, in private here at home.

“We should not be forcing people to continue with pregnancies, forcing them abroad, or forcing them to find illegal pills online.”

Speaking about voter registration, Síona added: “Regardless of your position, make sure you inform yourself, listen to the facts and make sure you’re registered to vote.

“We registered 18,000 students between September and November last year and we will be organising registration drives in the coming weeks too.

“It’s so important that people commit to going to the ballot on key issues like this one.”

For anyone interested in getting involved in campaigning in Longford, Síona is running canvassing training this coming weekend on Friday evening and Saturday. You can contact her on LongfordForYes@gmail.com for more info.

You can register to vote by downloading an RFA2 form online, getting a Garda stamp, and sending it freepost to Longford County Council as soon as possible.

Síona and her family are no strangers to politics. Her father, Mick is a councillor in the Ballymahon Municipal District and her younger sister, Úna, is looking set to follow in her sister's footsteps.

“Úna is a student of LSAD in Limerick, and this week she’s running to be the next LSAD Students’ Union President,” said Síona.

“She attended the USI ‘Women Lead’ project training day I ran in January, and came out of it knowing she was the best person to work for her Union.

“She’s an exceptional person and I know she’ll be an amazing president, the downside is we’ll have to work together for the first time ever!

“Also, for the first time I think ever - there will hopefully be three elected officers from Longford at local Students' Union level.

“It will be a Longford takeover,” she said.

As a parting word, Síona noted the support of her family, in particular her parents, as well as her two Grannies, “Granny Cahill from Colehill and Granny Agnes from Longford town”, who she says “always make me think bigger and work harder”.