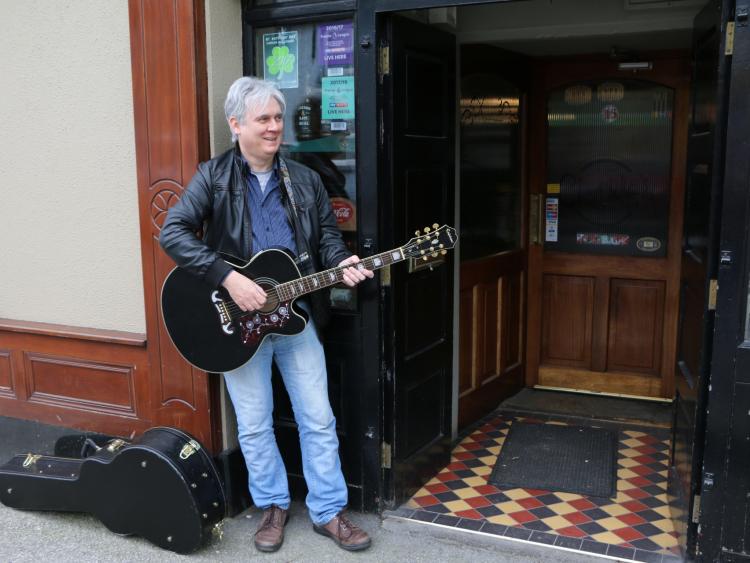 Easy Street is the name of his debut EP, but creating the work of art certainly wasn't an easy task for Longford musician, David Clarke - and he's quick to point out that a lot of work went into its production.

“This EP has been written as a result of years of writing and working with professional musicians, so there was a huge amount of background work behind the scenes that people may not be aware of,” David explained to the Longford Leader earlier this week.

“Having said that, I only really began writing the seven songs on 'Easy Street' in June 2017.

“It was a case of trial and error for six months. One week I could write something brilliant but then I might have to wait a month or even two months before I wrote another good one. It involved a lot of patience and I had to remain very focussed to try and create something that would last.”

And, despite its name - 'East Street' - the songs certainly don't reflect an easy life. In fact, David explains, the journey to Easy Street was quite difficult.

“The seven songs on the EP reflect a journey that wasn't always that easy in order to get to an easy place in life,” he explained.

The EP is categorised as contemporary folk and is 27 minutes of acoustic, melodic tracks - one of which was released as a single in June 2017 by Black Caviar Music Publishers in the United States. The song was 'Help Me Get My Feet Back On The Ground' and, although Black Caviar and another label in Donegal - Dynamik Records - wanted to releast this EP, David decided to go out on his own and release it independently.

“I just felt that I had more control over the release of the EP and all that goes with that. But I did pick up some tips from these record labels regarding the arrangements for some of the songs,” David explained.

David has been playing music for some time now. He played in his first band when he was a student in St Mel's College. The band played a Christmas concert in the school in 1989, but after the Leaving Cert, the lads went their separate ways.

“Music was put to one side after I left school as I pursued a career in computers which was quite unhappy and shortlived,” David recalled.

“I later studied English in UCG and ended up working in the Longford Leader, and it was only at this point that I started to take up music again.”

David put an ad in the Longford Leader and started a cover band with two musicians who were living in Leitrim.

“Rehearsals were difficult, as I had to drive from Mullingar to Leitrim every week. But we did play some gigs in various pubs in Co Leitrim and eventually ended up entering Leitrim's Got Talent.”

Shortly after that, however, the band broke up. But David's desire to play music certainly wasn't gone.

“I took up advanced guitar lessons for five years with a professional guitarist called Tommy Doherty in Delvin, Co Westmeath,” he recalled.

In fact, David credits much of his success to Tommy, referring to him as “one of the best pros in the business” and adding that without him, he doesn't think he would have written his EP.

“Tommy had played with the late, great Vinny Baker and he introduced me to the blues and artists like John Meyer, Zac Brown, Daryl Hall and others. My technique and expression on the guitar improved, I learned about funk and reggae rhythms and I also learned some music theory.”

During his time with Tommy, David wrote a song and played it on the Irish TV show, 'Longford County Matters', which allowed him to join IMRO (Irish Music Rights Organisation).

“After the music lessons with Tommy ended I continued to write and I wrote this EP between July and December 2017,” he added.

There are a number of things that have influenced David's music over the years, with music itself being one of his biggest inspirations when writing.

“Music itself has always inspired me to try to write songs. Hearing and being influenced by many great artists such as the Verve, Paul Weller, James Taylor, Radiohead, The Pixies, the Frames, the Drive by Truckers and others, has inspired me in turn to try to create music,” he explained.

“Having said that, I had to learn not to fall into the trap of trying to copy some of the great artists. So I always try and write from myself and put these influences to one side when trying to write a new song.

“Also, there is a sense of satisfaction and achievment when you write something and you know it's good. There is a sense that you have created something that will last forever even after you are gone and I find that inspiring.”

Now that 'Easy Street' is out on the airwaves, David has big plans to gig in nearby venues to promote it, but he's not stopping there.

“I have also started working on a new album, which means I will need another six or seven songs.”

In fact, he's already started writing more: “I wrote something last week that is as yet untitled, but it may well find its way onto the new album.”

So far, David has no gigs planned for Longford, but will be performing in Smiddy's Bar, Mullingar soon to promote his EP. He will announce his gigs on his Twitter page: @DavidiClarke.

'Easy Street' is available now in all major online stores such as iTunes, Amazon, Google Play, Deezer and Spotify.