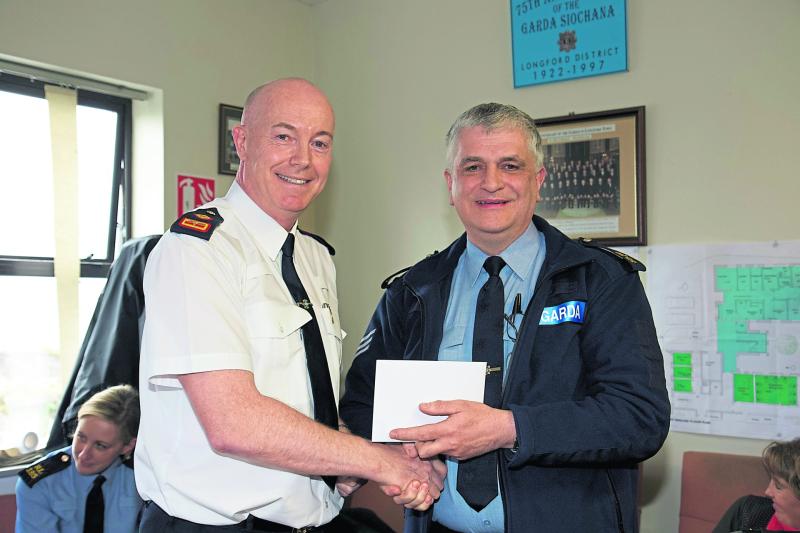 As gentlemen go, there are few that can match the unpretentious, self-sacrificing virtues of Sgt Dan Monaghan.

A proud north Longford man first and foremost, this quiet and most hospitable of public servants called time last week on a 40 year career of dedication and exemplary service to Ireland’s police force.

In keeping with that mantra, it came as little surprise when colleagues of Sgt Monaghan approached the Leader at the end of January to inform us of tentative plans to hold a surprise ‘retirement do’ in his honour.

The fruits of those exploits came to pass last Thursday when this journalist was asked to attend Longford Garda Station along with present and past serving members.

The touching and somewhat unexpected arrival of his brother Tom, sister Mary and nephew James was not lost on the man himself.

Having graduated from Templemore on November 30, 1977, the young and effervescent Garda Monahan was assigned to Muff along the River Foyle in Co Donegal.

It was a time when hostilities north of the border were steadily intensifying as sectarian violence pitted Catholic and Protestant paramilitary organisations against one another.

And, as the young garda from rural north Co Longford confided himself, those initial years would prove to be a steep learning curve.

“I was put on a checkpoint a couple of miles from Derry City not even knowing who an IRA, UVF, UFF man was, I hadn’t a clue what we were looking for,” he said.

Any lingering misconceptions as to the dangers posed by the Troubles were emphatically cast aside a year later when his next posting brought him to Omeath in Co Louth.

“I happened to be there at the time 18 British soldiers were blown up at one point and one person shot on our own side. I was 20 years of age and that was a very harrowing experience,” he candidly explained.

Master of Ceremonies, Sgt Gerry Newton, a man Dan has rubbed shoulders with for the past 22 years helped set the tone by paying tribute to his friend’s exceptional qualities as the station’s IC or Sgt in Charge for the past decade and a half.

“You know I have heard people saying they were born the year Dan joined the guards,” he told a hushed crowd inside the station’s canteen area.

“It’s so odd but it’s a long, long time and it’s a challenging place to work as an IC but Dan has carried it off very well.”

Though more ordinarily a station based function, the role of ‘IC’ is viewed as a key plank in the communications line between the upper echelons of the Garda management food chain and rank and file members.

One of those who could still recall the first occasion the amiable sergeant walked through the doors of the Longford station was Garda Liam Doherty.

“Dan arrived here with a full head of black hair from Granard and like a few more of us it has turned a bit silver in the meantime,” he quipped to much amusement.

“It wasn’t simple being IC in Longford. He had a lot to deal with but Dan dealt with things in his own inimitable way.

“If there was a problem, he was always someone you could approach and talk to. He had a sensible and calm head and he dealt with things properly.”

As is customary with occasions of its type, there were warm sentiments from the departing sergeant’s superiors.

Supt Jim Delaney said he had spent some time researching Sgt Monahan’s credentials and noted how he had seen no fewer than 12 garda commissioner’s come and go during his time in An Garda Siochána.

Laying claim to his diligence as IC and the “thankless” demands it requires of office holders, Supt Delaney said the choice of location for last week’s ceremony embodied everything Sgt Monahan stood for as a person and as a champion of his profession.

“What I have noticed in the two years since I came here is that you are keen on relationships, you are very, very humble and I think today is a testament to that,” he remarked.

“You wanted to go out on your own terms, which is a testament to that humility. You are extremely loyal to your colleagues, the people in this room and the people who have retired and you have a great respect for the community that you have served.”

The Longford Garda chief equally took time to remind onlookers of the connection between his retiring ‘IC’ and the Gardaí’s own internal code of ethics, qualities which sit proudly inside the four walls of its headquarters on the Battery Road.

“If you didn’t notice them on the way in I would ask you to look at them on your way out,” he asked.

“When you look at them, think of Sgt Dan Monahan because he is a testament to every one of the nine pillars that are there.

Features such as a duty to uphold the law, honesty and integrity, responsibility, accountability and leadership were merits to come in for specific mention.

“You are the epitome of all of those,” he told a plainly moved Sgt Monahan.

They were soundings which drew a lengthy ripple of applause from listeners, assertions which were followed by perhaps more carefree observations from Chief Supt Tom Curley.

Informing how the pair had known each other for 25 years, the Ballyforan native said there was no denying the size of the shoes Sgt Monahan was leaving behind.

Taking a polite, if slightly devilish snipe at Supt Delaney, he said: “Unlike Jim, I was an IC.

“Jim bluffed and went up the handy way. I know what it takes to be an IC.

“You need a quiet type of an individual and I’d say Dan kept many a thing away from the door of the super.

“Dan treated the criminal and injured party the same way as he would expect a member of his own family to be treated.

“We can have as many fancy words and fancy statements as we like but I think if we stick to those two lines I think the job is in a good place.”

That good place, he refers to is one which can undoubtedly be attributed to the unsung efforts of one of this county’s most respected and venerated gardaí to file through its ranks.