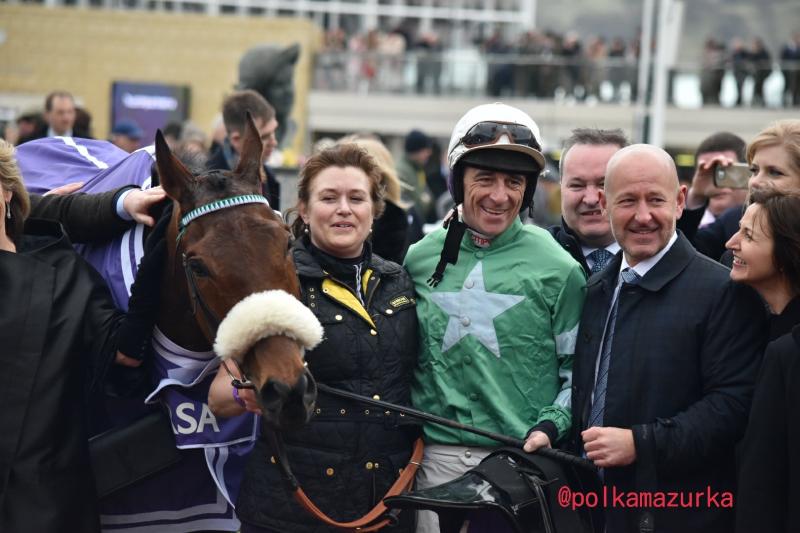 A spokeswoman for Paddy Power said the firm had been stung for more than €1m after a deluge of bets saw the Pat Kelly trained seven-year-old backed into favouritism for last Wednesday’s RSA Insurance Novices Chase.

It was a market plunge which paid the richest of dividends as Presenting Percy galloped his rivals into submission to win by an impressive seven length margin.

The manner of that win emulated those of 12 months earlier when the bay gelding handicapper claimed the Pertemps Final.

“While not a perceived banker, given that Presenting Percy was an Irish trained Cheltenham favourite who did the job 12 months prior he was always going to be popular across both Ireland and the UK and the overall payout was seven figures,” said a Paddy Power spokeswoman.

“He was a more local ‘tip’ 12 months ago in the Pertemps. The biggest bet we layed on him by a distance was actually in east Cork but there was massive local support for him in Longford specifically.”

In the immediate aftermath of Presenting Percy’s win, bookmakers soon took note and clipped him into 6/1 favourite for next year’s Gold Cup.

Giving his reaction, Mr Reynolds confessed to being “in pieces” as he paid tribute to the horse’s Galway based handler Pat Kelly.

Speaking about Kelly, who has given the son of late former Taoiseach Albert Reynolds a winner at the last three Cheltenham Festivals, he said: “For Pat to do what he’s done, with the number of horses he has in training, is just phenomenal.

“People might think I’ve gone out and blown out the lights and bought really expensive horses to put into training with Pat, but that’s not the case at all.

“The word genius is used far too often, but Pat is exactly that and he was a genius before I ever had horses with him.

“He’s got nine horses in training for me and about five or six for other people. Out of those nine horses he’s provided me with Cheltenham Festival success for the past three successive seasons, which is an amazing achievement.”

Mr Reynolds also revealed his double winning Cheltenham star will not be heading to the Punchestown Festival next month or any other racecourse this season.

“We’re going to pull the plug for this season. To have one as good as Presenting Percy, you need to mind him and look after him and we’re going to give him every chance.

“I can’t wait to get him home to my own farm in the next couple of weeks. I can go down and drool over him all summer so it’ll be great.

“We’ll send him back to the west in August, where hopefully Pat can work his magic again.”