Superheroes of the Literary World the theme for Ballymahon parade 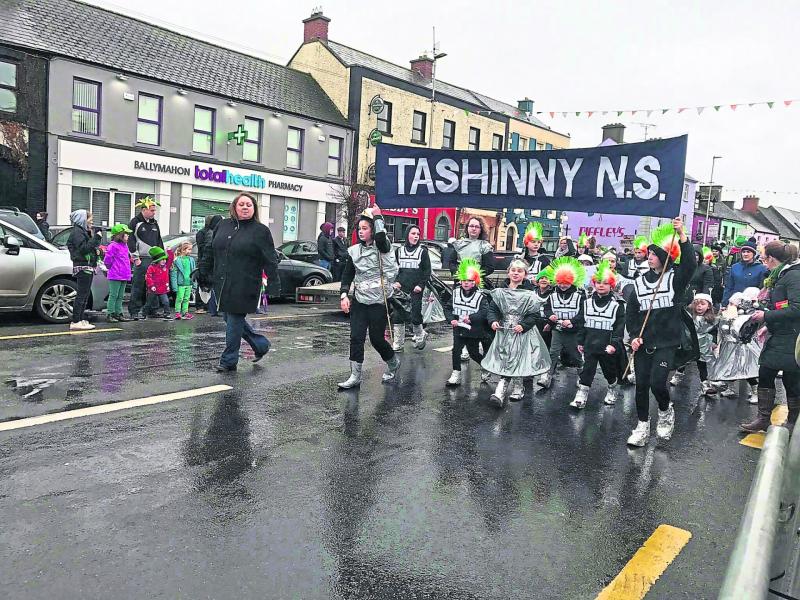 Pupils of Tashinny NS in their outfits for last year's futuristic Ballymahon parade. The theme was 'Ballymahon 2067'.

Superheroes of the Literary World is the theme for this year's St. Patrick's Day Parade in Ballymahon and it's sure to spark some creativity in the town as schools, businesses and local community groups put their artistic skills to good use.

There are usually around 40 entries in the Ballymahon parade and Chairman of the St. Patrick's Day Parade committee, Cllr Pat O'Toole, is confident that there will be over thirty spectacular floats at this year's big event.

“The themes are often aimed at the schools, and we’ll have Ballymahon, Colehill, Taghshinny, Tang - all the local schools taking part,” he told the Longford Leader earlier this week, adding that there will be a number of community groups involved too - not to mention some of the usual fixtures and fittings.

“We'll have the Manorcunningham Pipe Band who come down from Donegal every year for the parade,” Cllr O'Toole explained.

“And we'll also have the Athlone Pipe Band. Tanglewood will also be involved - they have about 20 members and play traditional and folk music.”

There will be numerous competitions on the day too, including the Best Overall Float, Best Shop Window Display, Best School Entry and Best New Entry.

Best of all, you don't have to pre-enter the parade. It you've got a float that you'd like to enter into the competition, just show up on the day - and bring a few friends with you to join in the Paddy's Day celebrations.

“You can just show up with your float or your group,” Cllr O'Toole confirmed.

“That’s all. Just show up on the Creevaghbeg Road at 4.15pm to enter.”

Make sure you're there at 4.15pm sharp though, if not a little earlier, as the parade will be kicking off at 4.30pm.

And it promises to be a great event, full of craic agus ceoil as we celebrate our patron saint.

“But we still had over two thousand people attending the parade.

“We’re hoping for better weather this year, but people always make an effort to attend and it’s always a good event, so we’re looking forward to it.”

The parade will kick off at 4.30pm sharp, leaving you plenty of time to watch the match beforehand. But don't forget, if you want to enter the competition, show up on Creevaghbeg Road at 4.15pm.

Back to the future for Ballymahon parade this St Patrick's Day