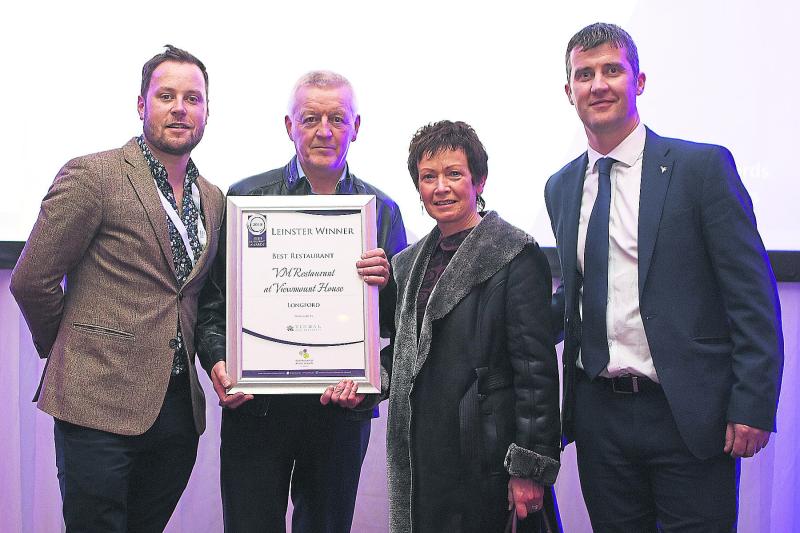 There was good news for Longford last week as 14 awards were brought home to the county from the first of four regional finals in this year’s Irish Restaurant Awards.

The awards took place in Knightsbrook Hotel, Trime, last week, where 165 awards were presented to the country’s leading chefs, restaurants and pubs.

Over 550 people attended the Leinster Regional Final on Wednesday evening, March 7 last, where the top establishments in each county were named.

Meanwhile, Jac-O-Bites Café was the recipient of the Best Kids Size Meal, and the popular Spice India Restaurant was the winner of the Best World Cuisine award.

Nine Arches Restaurant in Ballymahon won two separate awards at last week’s event. The first was Best Restaurant Manger, which went to Lorna Halligan, and the second was the Best Newcomer award.

The awards covered a wide range of venues and the winners from each of Leinster’s 11 counties were selected from 15 categories.

Speaking at the awards, Chief Executive of the Restaurants Association of Ireland (RAI) said: “Now in their 10th year, the Irish Restaurant Awards continue to showcase the exquisite and admirable calibre of food available in our restaurants and pubs nationwide.

“Online nominations have increased from 9,000 in 2013 to over 80,000 this year and with the increase in interest comes an increase in standards, making the judging process more difficult than ever.

“Our small island boasts everything from fine dining to high quality gastropubs, from the exotic taste explosions of world cuisine to the comfort of traditional dishes.

“We have an appreciation for what we eat, for the journey of our food from farm to fork, and for the dedication of those working in the food industry to serve up Ireland’s finest food.”