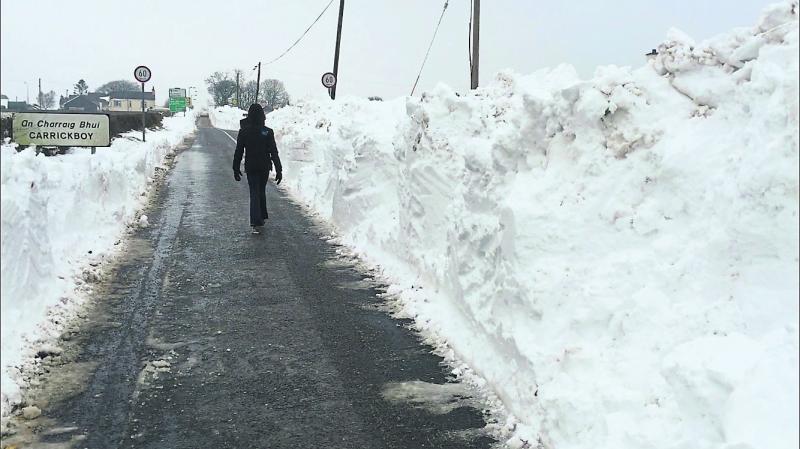 Clodagh finally gets to the shop! Carrickboy was particularly badly hit by Storm Emma and the road just opened on Monday, March 5. Photo by James Murtagh

It came, it stayed for the best part of two days while wreaking havoc and disruption across the entire county and beyond.

A ‘serious weather event’ it was billed as, and one which a generation growing up in these parts had never witnessed before.

Yet, through all of that adversity there was a tale of inimitable warmth, a narrative which shone an inspiring light on the rich sense of community spirit and pride that has become this county’s enriching hallmark.

From Colmcille to Ballymahon, from Colehill to Abbeylara, that sense of solidarity and togetherness was not lost on the scores of volunteers who rubbed shoulders with local authority workers, Defence Forces, ambulance and fire service crews to help those in most need.

It was a collaborative effort which has come in for noteworthy admiration from senior figureheads locally as the county attempts to return to some semblance of normality.

“I have to compliment the members of Longford (Garda) District in its entirety because the dedication to service they showed by coming in in extreme weather conditions and provided an excellent service,” said Longford Supt Jim Delaney.

The Longford garda chief said there were umpteen examples of heroism which were on display over the course of last week, one of which included the decision by one local man on board a tractor in Ballymahon to lend his assistance to emergency services in an attempt to clear snow laden roads for motorists.

Granard based Supt Brian Mohan opted to reserve a special mention to a number of 4x4 civil defence vehicles which had been made available by Longford County Council to help respond to emergency type situations.

“Without them we wouldn’t have been able to operate at all,” he said.

Chairperson of Co Longford’s Joint Policing Committee (JPC) Cllr Gerry Warnock said the goings on of the past week had only served to underpin the rich and undivided comradeship that existed within the county.