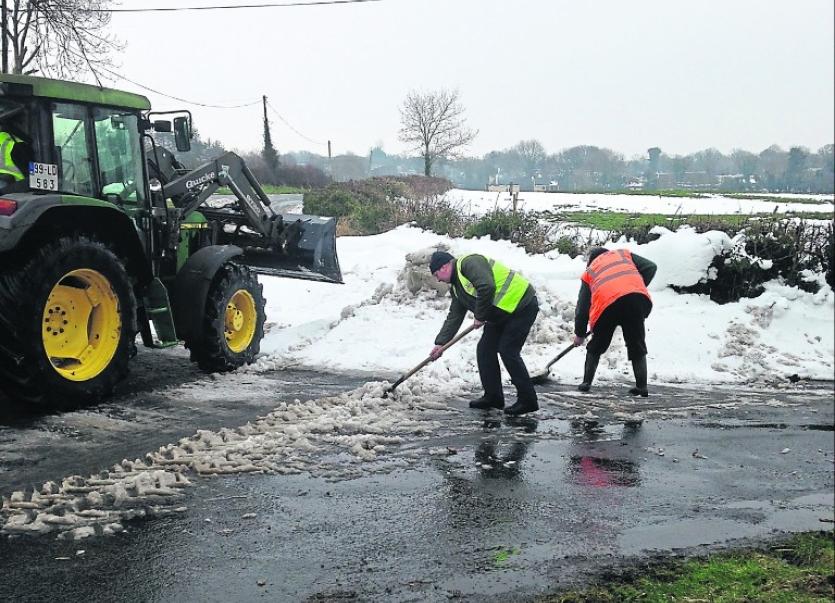 If anything good was to come out of adverse weather conditions of the last week it had to be the rise of community spirit across the county.

Ordinary people from the farming and local political communities from Ballymahon to Mullinalaghta and from Edgeworthstown to Newtownforbes donned the hats and wellies, grabbed the nearest shovel, alerted those with tractors, diggers and jeeps to roads and residential areas completely blocked off by heavy snowfall, and did extraordinary things!

Out at Rincoola between Granard and Abbeylara concerns grew for elderly residents along a stretch of road that became completely blocked off from the rest of the area.

Noel Masterson said locals couldn’t even get to Granard for supplies because road conditions were so bad.

The residents in Rincoola however, rallied together and before long, the route became passable enough so that those in need could access the local town and other necessary services.

“Everyone did their bit that is for sure,” a delighted Noel Masterson told the Leader on Monday.

“The snowfall was very bad and the road here in Rincoola got completely blocked off; we started getting concerned about access for people and especially those who were living on their own - the road was filled with snow from one side to the other.”

Noel rounded up the troops, as they say, and before long there were shovels and tractors at the ready to get the snow removed.

“Tractors and loaders came out; Longford Co Council also helped us out and we cleared at least a quarter of a mile of the lane,” smiled Noel, before adding; “everywhere you looked around in Granard and Abbeylara people were shovelling snow”.

He also pointed to the fact that there was an elderly lady on the road who lived alone and another resident who wasn’t well and had been in and out of hospital in recent times.

“We were concerned for those people and the main thing was to get the road cleared in case they needed to get into the town and to allow emergency service access to the area if they were needed.

“We were all shocked when we heard about the house in Finea the other night; the chimney went on fire and the fire brigade was called.

“But unfortunately, because of the weather and the condition of the roads, the fire brigade crashed, didn’t make it to the house and it burned to the ground.

“People around here were also anxious about food supplies; food was running out in some houses and people needed to get to Granard; the road was treacherous.”

Meanwhile, farmers too in the area struggled to get water to cattle that were in sheds and Noel said that a local man’s jeep got stuck on the road in the early days of the storm, but a nearby farmer had arrived down with his tractor and pulled a man and jeep out of the gripe.

“What do you do when mother nature calls,” the north Longford man added.

“You just have to get on with it.”

Noel also recalled the snowfall of 1982.

He remembers it well and says conditions were worse during the snowfall of 2018.

“We removed snow with tractors and transport boxes in ‘82, but I can tell you one thing, you would not have removed the snow last week with a tractor and transport box - it required far more heavy machinery this time round.

Community spirit is alive and well in Longford, meeting told