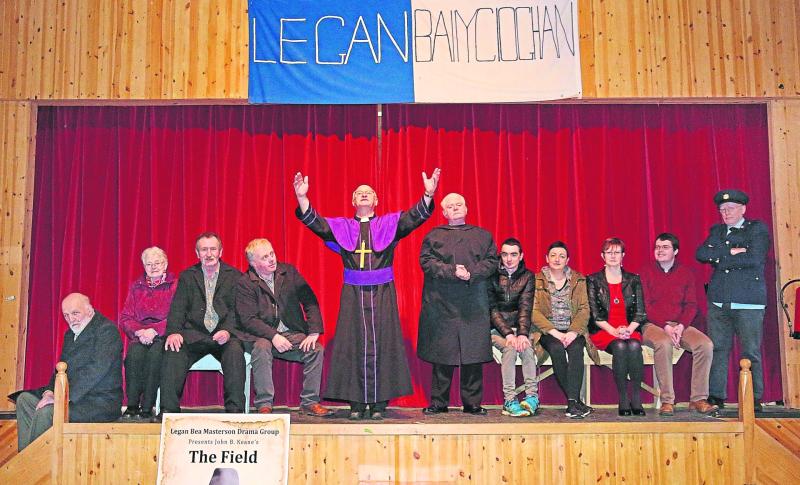 The cast of 'The Field' at rehearsals last weekend. Photo by Shelley Corcoran

With back roads now officially impassable in many part of the county today, the local production of John B Keane's 'The Field' which was to be staged in Legan's Aurora Hall this weekend is now cancelled.

In fact, in a statement this morning, Longford County Council reported that the R393 Carrickboy to Westmeath border was closed as was Legan Rock to Curracorkery route in Legan and the Cam Road to Edgeworthstown - routes that would, under normal circumstances, allow people to travel to Aurora Hall in Legan.

“But what can we do; roads are impassable in this area and it’s going to freeze again tonight; people are just not going to come out when driving conditions are so dangerous.

“People are snowed in too.”

Meanwhile, John B Keane's 1965 play 'The Field' has always been popular among theatre-goers and film buffs alike - especially following the 1990 film adaptation of the play, starring Richard Harris, John Hurt and Sean Bean, and the community in Legan was expecting large crowds to descend on the area this weekend.

The cast and production teams of the Bea Masterson Amateur Drama Group had been busy practicing and perfecting the stage for the last few months to ensure a wonderful production in Legan this weekend, but sadly, it is not to be.

Cast members are hopeful, thought, that the production will take place later this month with dates still to be confirmed.

“Back roads around here are very bad at the moment and people just can’t get out,” Mr Ward continued.

“Plans for the play are still going ahead, we just don’t know exactly when it will take place, but it’s very likely that it will be staged later this month.

“This year, we even started things earlier than usual, so it’s frustrating to see the way the situation has worked out for us this weekend.

“But I have every confidence that The Field will go ahead at some point this month.”