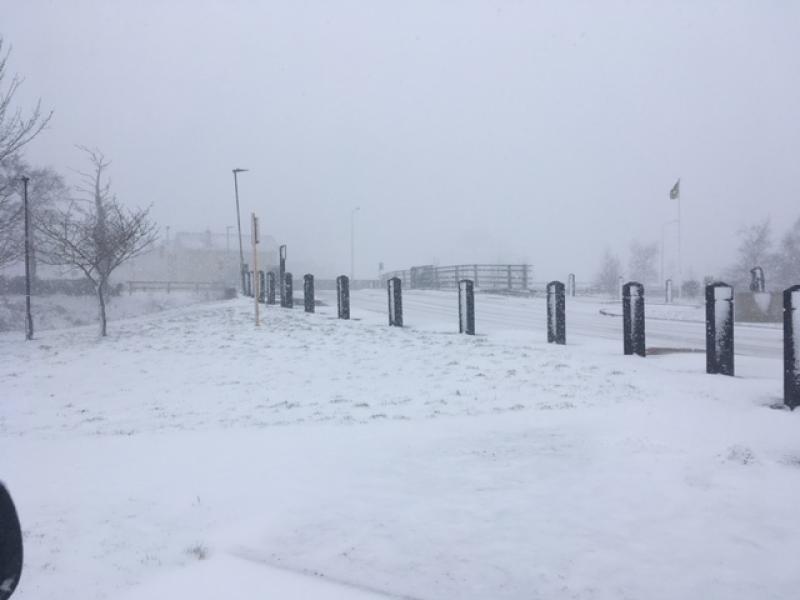 The Mall in Longford town is covered in snow this afternoon

Confirmation in Killashee for Clondra, Cloontagh and Killashee national schools which was due to take place on Saturday at 11am has been postponed due to the adverse weather and will now take place at a later date.

The Leader also understands that Confirmation for the pupils of Fermoyle NS and Lanesboro Primary School scheduled for Friday March 2 has now also been cancelled.

All schools in Co Longford will be closed Thursday and Friday and Day Services at St Christopher’s Services have closed this afternoon, while the IFA AGM scheduled to take place in Slashers this evening has also been cancelled.

In Longford town, The Mall Complex is closing early today and the Department of Social Protection HQ has indicated that it will be closed on Thursday and Friday of this week.

Meanwhile, Longford Co Council announced in the last hour that back roads in the county will not be treated, but the local national and regional routes will be gritted in the coming hours.

Cathaoirleach, Cllr Martin Mulleady (FF) told the media today, that because weather conditions have deteriorated so much this afternoon, local authority staff operating snow ploughs and gritting machines will have difficulty accessing the necessary routes this evening.

“Accessing those roads is going to be an issue because there is heavy snowfall at the moment,” he added.

These locations include; the car park on the Ballymahon Road in Edgeworthstown; the car park in Ardagh behind the playground; the chip dump in Moyne; Granard Depot; Drumlish Church; Ballinamuck Cross and the GAA pitch in Killoe.

“We are hopeful that council staff operating lorries with snow ploughs on the front of them will get out to salt all the roads, but I do want to stress that back roads will not be salted - physically they can’t be done, so the priority will be the primary and regional routes,” Cllr Mulleady concluded.