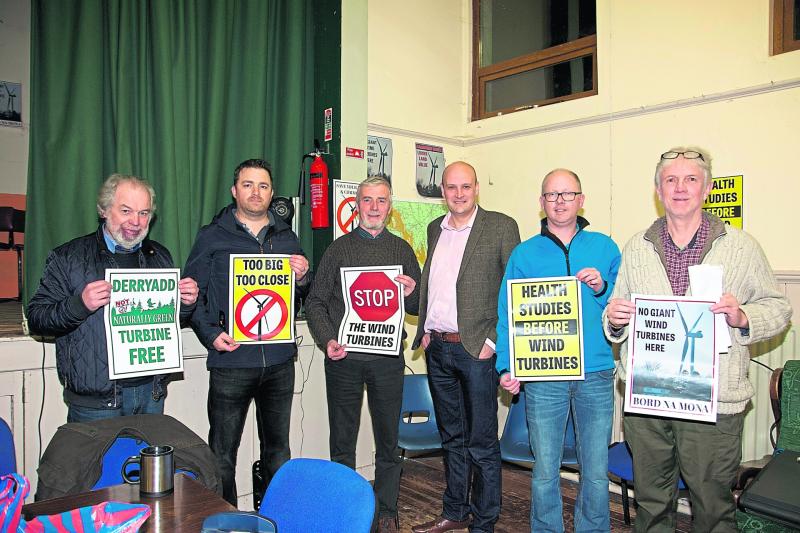 Chronic sleep disturbance, dizziness, tinnitus, heart palpitations, vibrations, and pressure sensations in the head and the chest are what will possibly be in store for residents of south Longford, should Bord Mona's proposed Derryadd Wind Farm go ahead.

That's according to extended research carried out by Michael Keating, a member of the No to Derryadd Wind Farm committee who presented the information at a community meeting in Lanesboro on Monday night.

Mr Keating's home is situated within 650 metres of the nearest proposed turbine should the plans for the farm go ahead, and he expressed his concerns for the health of those who are within a similar distance to the proposed turbines.

“In 1979, three counties in Ontario, Canada, submitted so many complaints to county councillors that they set up a working group,” he explained, adding that the health problems were the main subject of the complaints.

“Also in 1979, residents within three kilometres of an industrial wind turbine farm erected in North Carolina made similar complaints to those made in Canada.

“In response, the US of energy and NASA commissioned Dr Neil Kelly of the National Renewable Energy Plan to carry out a detailed investigation into these complaints,” said Mr Keating.

Also read: Derryadd residents say Bord Móna will not 'divide and conquer' them

Dr Kelly and his colleagues in NASA, he added, found that there were three main categories of sound or noise emitted from the industrial wind turbines - the typical 'swoosh' of the blades; the mechanical sound of the generator and gearbox connected to the rear of the blade shaft; and infrasound, which is a noise.

“(Infrasound) is by far the most distressing to some human beings and animals,” Mr Keating explained, adding that a survey has already been carried out to monitor sound levels in the area.

Over a ten-year period, Dr Kelly and his colleagues conducted proper field and laboratory research, which has since been replicated numerous times and by numerous researchers across the developed world.

“This research established a link between the turbine-generated infrasound and noise and the symptoms - including sleep deprivation and disturbance reported by the North Carolina residents,” said Mr Keating.

“Chronic sleep interruption and deprivation acknowledged in typical medicine as a trigger for far more serious health disorders and problems.”

Nearer to home, seven households in Banteer, North Cork, sued two wind turbine companies for a very large amount, due to health problems caused by the noise of a nearby wind farm.

In attendance at Monday's meeting were two Sliabh Bán residents, who are already experiencing the effects of living beside a wind farm.

Martin , who has two turbines facing his home confirmed that residents in the area have experienced problems with TV, internet and phones, as well as shadow flicker, where the blades of the turbine throw a shadow across nearby houses as they spin.

“All the concerns that you’ve mentioned the presentation... they’ve all happened in Sliabh Bán,” he said.

His neighbour, Breda O'Malley agreed with him, adding: “The noise is unbelievable. It’s unreal. It’s just horrendous. You can hear it inside the house and outside. In at night you’re listening to it.”

With this in mind, Mr Crinnegan commended the No to Derryadd Wind Farm group on their unity, adding that it was pertinent they stick together on this issue, no matter what.

“If we had that amount of information, I think we might’ve had a better chance of fighting the wind turbines.”