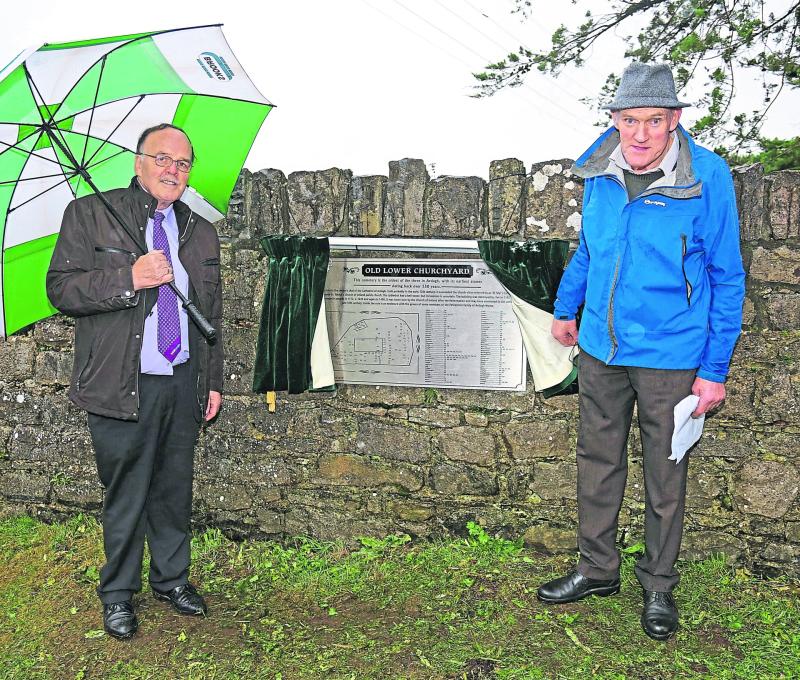 Luke Baxter and Tom Bannon at the unveiling of the information plaque in the Old Lower Churchyear, Ardagh

Friday the 13th last was a great day for Ardagh village, despite the suspicions attached to the date.

It was on Friday 13 that one of Longford's oldest churchyards was enhanced by a new directional sign commissioned by the Tidy Towns Committee.

The new plaque was unveiled in the Old Lower Churchyard and the ceremony was attended by a large number of locals.

“It went really well. There was a good turnout. It rained, but that didn't put anyone off,” said committee member, Mary Lyons of the event.

Proceedings kicked off with an introduction by Tom Bannon, Chairperson of the Tidy Towns Committee, before Luke Baxter unveiled the plaque itself.

This was followed with a joint blessing by Church of Ireland Canon AW Kingston, and local Parish Priest, Fr Brennan.

The information plaque complements the extensive work undertaken by Luke Baxter, which culminated in the publication of his book, 'Our Roots in Stone' in 2013 in association with the Tidy Towns Committee.

There was then a talk by Longford Archivist, Martin Morris, on the history of the church, which dates back to around 1200, and the stones, which date back to the 1600s and 1700s.
“The oldest stone dates back to 1646,” Mary explained.

“There were a lot of local people present - many of whom have forebears that are buried in that churchyard, and many of the names on the headstones are still in the village today.”

This information plaque, according to Mary, will be a huge addition to the local area.

“A lot of tourists would wander in there and not know anything about it unless they had a copy of Luke Baxter's book,” said Mary.

“The whole point was to have an information plaque for them.

“Now there's a point of information for tourists and for locals.”

And, she added, there are plans in the pipeline for more information plaques, like the one unveiled in the Old Lower Churchyeard, to be erected in various other locations around Ardagh.

The new plaque can be seen and visited in the Old Lower Churchyard, Ardagh.