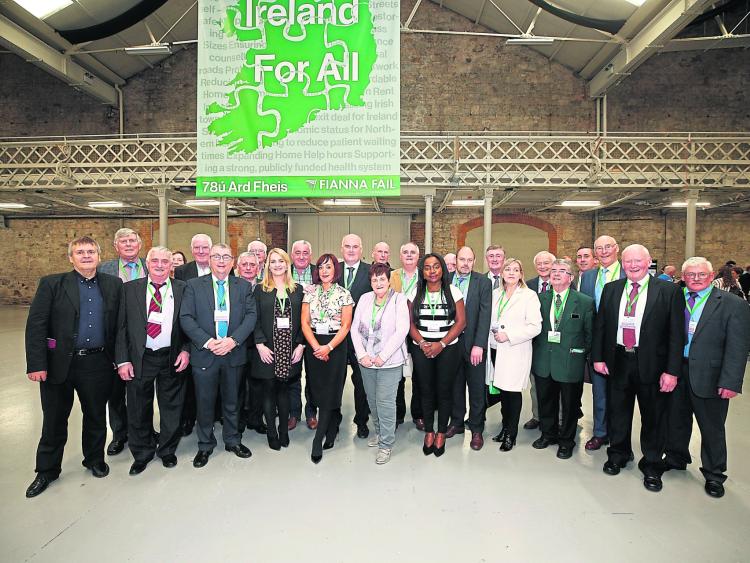 Fianna Fáil General Election candidate for Longford, Joe Flaherty, surrounded by a section of the large Longford contingency who travelled to the party’s Árd Fheis in Dublin at the weekend.

A large number from Longford travelled to Dublin at the weekend for the Annual Fianna Fáil Árd Fheis.

It was the first Árd Fheis for Joe Flaherty following his recent selection as the party candidate in the next General Election.

The Longford candidate addressed the Árd Fheis in a session dedicated to the Brexit challenge and he told the party faithful: “The UK referendum to support an exit from the EU represents one of the biggest threats to Irish jobs since the foundation of the State. It’s already impacting negatively on many businesses throughout the Midlands and Border region.”

He said he was all too aware of the challenges facing SMEs and export led businesses and felt the issue was especially prevalent in Co Longford where IBEC research has highlighted that as many as one in five jobs are Brexit exposed.

And he was critical of the Fine Gael left government’s failure to put the necessary contingencies in place.

Fianna Fáil have campaigned since the Brexit referendum result for Ireland to seek increased state aid flexibility in order to bring in supports to sustain and protect the most exposed businesses with direct financial aid.

In 2009, an Enterprise Stabilisation Fund was set up that allocated €100m over two years to support vulnerable exporting companies experiencing difficulties, while an Employment Subsidy Scheme helped support over 90,000 jobs.

Mr Flaherty told the Árd Fheis: “Securing changes to state aid ceilings is a vital policy action required to protect enterprises and exporters hit by a hard Brexit. This government need to wake up from the obsession to spin at every moment and do what is in the national interest.”

It was a busy Árd Fheis for delegates from the Longford Westmeath constituency and one of the highlights was the election of former TD and Castlepollard based, Donie Cassidy, to the role party Vice President.

He was strongly supported by the Longford delegates as was Aideen Ginnell from Mullingar, who was re-elected to the powerful committee of 15.

Longford Fianna Fáil campaigner, Kevin Keegan, from Ballymahon, was one of a handful of members from across the country, who were presented with special awards at this year’s Árd Fheis by the party President, Micheal Martin, in recognition of their outstanding service to the party.