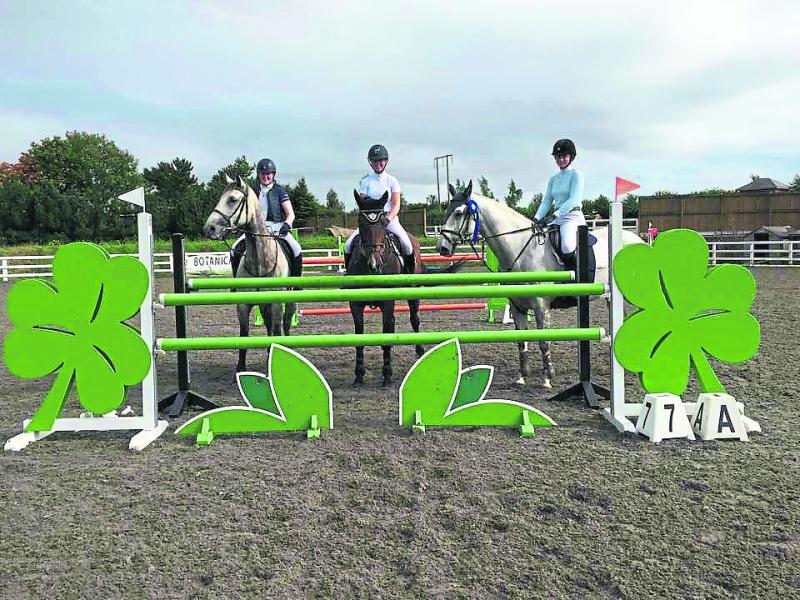 The Irish Pony Club Show Jumping Classic Final was held at Coilóg Equestrian Centre, Naas, Co Kildare on Sunday, September 3. This is one of the final championships scheduled in the Pony Club national calendar.

In total, 83 competitors from around the country competed across all classes. Yet again Longford Pony Club took home a number of rosettes - the success of this vibrant Club at area, national and international level, is testament to the dedication of members, excellent training provided by instructors in all disciplines, support by parents and the hard work of committee members in organising pony camps and rallies.

It highlights the importance of developing young equestrian athletes through the provision of training and competition.

The commitment to support new members and provide opportunities to develop equestrian talent continues to be a priority and there is no doubt that this Pony Club is certainly doing its part to put Longford on the map.

Edel from Granard and Thomas from Ardagh each had an unlucky fence down in their competitions. Both have successfully represented Longford Pony Club at Championship level, competing in Dressage, Show Jumping, Eventing and Combined Training. Edel is currently in Transition Year in Ardscoil Phádraig, Granard. Thomas has recently commenced Agricultural Science in UCD.

This is Emer’s first year to compete on Big Blue Nun - she had a very successful trip to Millstreet International Show where she won the 1.0 meter Young Rider class. She previously represented the Club at Hunter Trials and Show Jumping championships and was a member of the successful Ballymahon Vocational Schools inter-school teams.

Edel Whyte was placed 3rd in the 1.10 meter Classic Finder and 4th in the 1.20 meter Classic. Edel, from Legan, was riding Gerry Whyte’s home bred and produced Abel Star. This combination was second in the 2017 Individual Open Championship in Mullingar.

Edel is currently studying for her Leaving Certificate in Ballymahon Vocational School. She has successfully represented her school at inter-schools show jumping competitions and competed at Championship level in all Pony Club disciplines.

Rebecca Yorke, from Ardagh, was placed 2nd in the 1.20 metre class on her horse E Corletta and was awarded a Training Bursary to the Army Equitation School at McKee Barracks.

This summer, Rebecca was awarded a bursary for SJI elite training in Cork and was also selected to complete at a summer camp at the Longines World Equestrian Academy with the renowned German show jumpers Thomas Stiller and Ludgar Beerbaum.

Aisling McGreal from Ballinalee won the 1.20 metre Classic at Coilóg on Harold McGahern’s Kimono Sash. This was the second consecutive year for Aisling to win this competition.

Having previously won the McKee Training Bursary, Aisling was awarded a Pony Club training bursary. Aisling competes from her family farm at Corbeagh House and has represented Longford Pony Club in Dressage, Hunter Trials, Eventing and Show Jumping. During 2017, Aisling was successful at the International Shows in Mullingar and Millstreet and the RDS Dublin Horse Show in the Small Event Horse Class.

In 2016, she represented Area 6 at the Dublin Horse Show where she was Reserve Champion in Members Combined Training. Aisling is currently studying Agricultural Science in UCD.

Aisling with Club members Edel Whyte and Rebecca Yorke were members of the successful Longford Pony Club team that represented Ireland at the recent UK Pony Club Championships. Recognising this success, Longford Pony Club was shortlisted for the Ganly's Longford Sports Star of the Month Award for August and, in a very tight contest, came out on top.