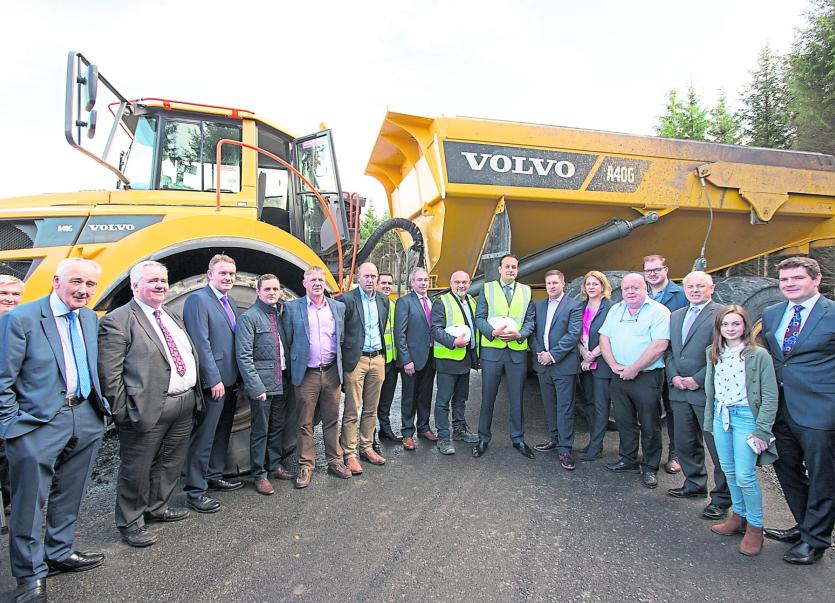 An Taoiseach Leo Varadkar at the Center Parcs construction site last Friday afternoon. He is pictured here with a number of councillors, business owners and locals.

Mr Varadkar was speaking on Friday after turning the sod on the commencement of construction work at Center Parcs Longford Forest in Ballymahon.

The UK leisure giant plans to create up to 1,000 full and part time jobs in addition to 750 jobs that are due to come on stream during its construction phase.

“We live in a time of extraordinary change and undoubtedly there are challenges ahead not least from Brexit so it is essential we continue to focus on competitiveness and value for money as well ensuring the free movement of people between north and south and between Britain and Ireland continues unabated,” he said.

Mr Varadkar said the sheer level of capital being injected into the Irish economy as a result of Center Parcs planned opening in 2019 was unprecedented.

He claimed the venture had the ability to “unlock the potential of rural Ireland” and was something which complemented the Government’s €60m Action Plan for Rural Development.

“This exciting development by Center Parcs represents a significant investment in the Irish economy, and especially in tourism,” he said.

“The €200m investment is almost certainly the biggest in the region’s history.”

The Fine Gael leader was in jovial mood too, citing how his own name was indelibly linked to acclaimed local poet John Keegan Casey.

That drew a light hearted spattering of laughter among assembled politicians and invited dignitaries.

Among them was Center Parcs CEO Martin Dalby who raised plenty of cheer himself when appearing to struggle with his pronunciation of Mr Varadkar’s surname.

Mr Dalby said the sod turning ceremony marked a key milestone in Center Parcs’ decision to branch into the Irish tourism market and the vast revenue streams it would bring to Ireland’s economy.

Besides the four figure jobs boost to the area, Mr Dalby maintained the Center Parcs model would likely add upwards of €32m each year to Irish economic coffers.

The Center Parcs boss also revealed contracts for the building of over 450 lodges and central buildings on the 395 acre site at Newcastle Wood were in train, with a formal announcement expected before the end of the year.