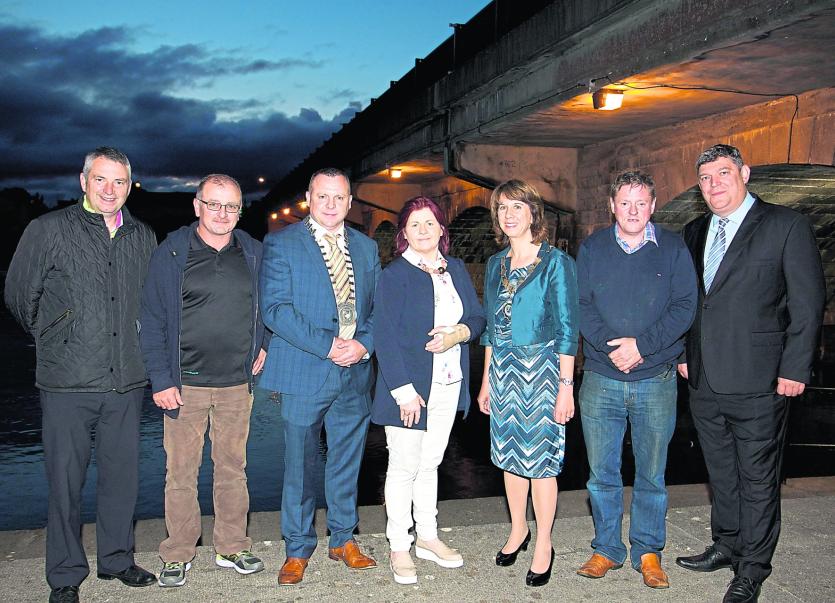 The River Shannon Bridge bordering Longford and Roscommon in Lanesboro is the envy of the country and even Europe thanks to the installation of new state of the art lighting.

In a joint venture involving Longford and Roscommon County Councils, the lights were officially switched on last Friday week (August 28).

Local Councillor Mark Casey and Chairman of Lough Ree Environmental Festival said the finished product has already been warmly received by locals and visitors to the area.

“We have had a huge reaction,” he beamed when contacted by the Leader last week.

“They (lights) really look the business. You wouldn’t see a bridge on the River Seine in Paris looking as well.”

For all its striking appearance, Cllr Casey said the cost of the lights installation was remarkably inexpensive.

“I got it done quite cheap and it really is good value for money,” he contended.

The Lanesboro based public representative said reaching an agreement with the latter named local authority did present its own difficulties however.

“Let’s just say they (Roscommon Co Council) were reluctant to come up with the money.

“I just said ‘Well I will light up the first four lights (on the Longford side) and you can explain to people why the other three lights (at the Roscommon end) aren’t lit,” he impishly put it.

Cllr Casey revealed the remaining balance of the funding came courtesy of the local Summer School.

Asked why a decision was taken to introduce new lighting under the bridge, Cllr Casey was quite unambiguous with his response.

“It was a vanity thing pure and simple,” he said.

“There was lights put on (the bridge) years ago but not to a good standard, but now it is.”

And it certainly seems to have struck a chord with those who have seen the new lights online.

“We had 3,800 hits within three days on Facebook. The amount of people who have contacted me has been unreal,” he said.

In a further revelation, Cllr Casey said the finishing touches were currently being made to the proposed opening of an artificial beach along the shores of Lough Ree.

An initiative driven by the town’s Summer School, a date of September 23 has been pencilled in for its grand opening.