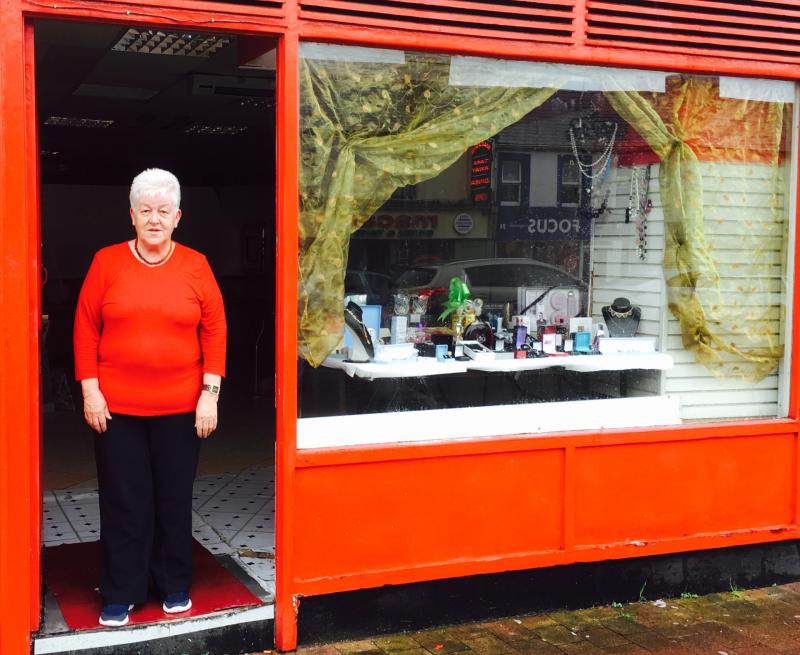 Irene Brady pictured outside the pop up shop this week. It was robbed on Tuesday afternoon,

Callous thieves have stolen jewellery, watches and perfume from a charity shops three days before it was due to open.  The goods were  part of a quantity of stock donated to the shop to raise funds for the Oncology Unit in Cavan General Hospital.

The pop-up charity shop on Ballymahon St was the brainchild of Longford town woman Irene Brady and it was due to open on Friday and Saturday of this week, August 25 and 26. She wanted to open the shop to raise money for Cavan Oncology Unit where her sister Madeline Canning is currently undergoing treatment for breast cancer.

However the shop was broken into earlier today and heartless thieves made off with a large quantity of goods that had been donated for the shop.

“We are in total shock,” Irene Brady told longfordleader.ie this evening.  She described how they had set the shop up today to prepare for its opening on Friday.  After leaving the premises for a few hours this afternoon, she returned to discover that the shop had been robbed.

“I thought the roof had fallen in,” she said, describing the mess that the thieves left behind.

However she quickly realised  that a large quantity of the high end stock  had been robbed. According to CCTV footage, the thieves entered around 3:10pm.

“After all the goodwill shown to us, they just came and cleaned us out,” Irene said.  “We just cannot believe it.”  She added that the stock donated was “all perfect” and would have raised a considerable amount of money for charity.

Although devastated by the theft, Irene says she will open her pop-up charity shop this week as planned.

“They are not defeating me,” a defiant Irene said, adding that she is determined to raise funds for the hospital.

The shop will open on Friday and Saturday, August 25 and 26,  in a new location, an alarmed premises in Hibernian Court beside Courtyard Cafe.

Irene has issued a renewed appeal for donations to the shop ahead of its opening.

“We really need them. We are so sorry that this happened and we are very grateful to the people who did donate. We would really appreciate donations,” she said.