Longford's Vincent Doyle met Pope Francis in Rome in 2014. Vincent handed the Pope a letter that he had written for a conference of Irish Bishops urging them to help children of priests. He also told the Pope that he was the son of a Catholic priest in Ireland. 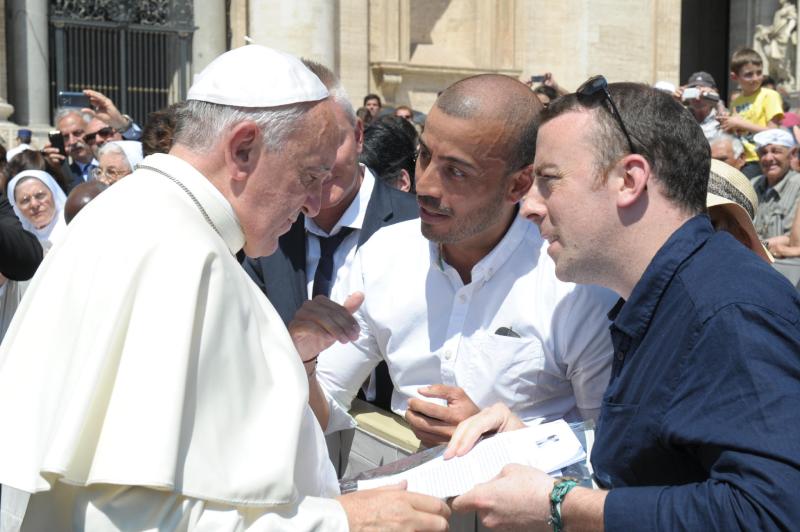 A Longford man is behind new guidelines that have been established by the Catholic Church in relation to supporting children whose fathers were priests.

Entitled Principles of Responsibility regarding priests who father children while in ministry the guidelines are expected to be published within weeks.
Vincent Doyle (34) who hails from Longford town is the son of Fr JJ Doyle who served in Ardagh and Edgeworthstown throughout the 1980s and 1990s.
Fr Doyle died from lung cancer in 1995.
But it wasn’t until 2011 that Vincent discovered that Fr Doyle was his dad.
He was 28-years-old and the news came as a shock, especially as he knew the priest “very well”.
It was then that he realised there was no mechanisms in place to support people who found themselves in situations similar to his own.
So, Vincent decided to do something and in 2012 he established a website - copinginternational.com. The website was subsequently funded by Archbishop Diarmuid Martin.
“I began thinking a lot about the children of priests and how many there were,” he told the Leader this week.
“And one thing that that copinginternational.com has done is, that is has extrapolated a lot of data in relation to this.”
The former St Mel’s College student says to date people from 175 countries have visited the website. According to Vincent, 1.6% of the hits centre around one question put into the search bar - “I am pregnant and the father is a Catholic priest”.
“This means that priests fathering children is an ongoing issue and not just an historic one,” he added, before pointing to the importance of the site.
“Really it is a stepping stone for a woman who is pregnant and the father of her child is a priest; it helps with the mental health of the person as there are a number of sections including ‘safeguarding’ as well as letters from the Archbishop, the UN and the Holy See.”
From there, the new guidelines were developed and Vincent says they will be published shortly and placed on copinginternational.com. Ahead of their publication, Vincent’s story was covered in the Boston Globe as part of an investigative series into the issue earlier this week.
The new guidelines emphasise that the needs of the child should be given first priority.
“In the case of a child fathered by a Catholic priest, it follows that a priest, as any new father, should face up to his responsibilities – legal, moral and financial,” it states.
“At a minimum, no priest should walk away from his responsibilities. His relevant church authority (bishop or religious superior) should also direct such a priest in addressing his responsibilities.”
Unlike many in his situation, Vincent knew his father and spent a lot of time with him when he was growing up.
“He was a good man; a kind man,” he smiled before pointing to the many influences his father had on his life.
Vincent initially attended Maynooth University where he studied Theology, Philosophy and English.
From there he took a Masters Degree in Chaplaincy and Pastoral Care at Mater Dei and spent a year at Seminary in Spain before deciding that the priesthood wasn’t for him.
He is now a Psychotherapist and engaged to be married.