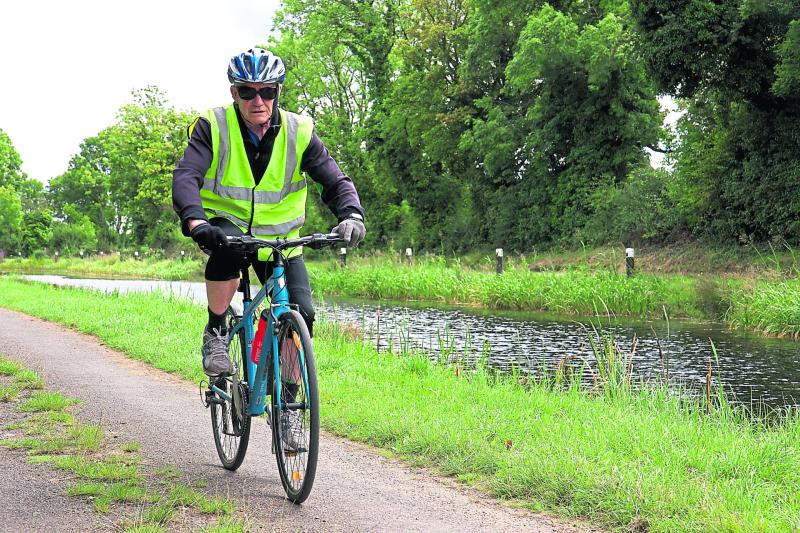 Pat Barden, enjoying a peaceful cycle along the Royal Canal.

Last Friday, the Leader caught up with some tourists who have been visiting the south Longford area over the last week or two.

The weather was great and there was a great buzz around Clondra Harbour with a mix of visitors from Dublin and Antrim as well as a couple from Tasmania who were in awe of the natural beauty they found themselves surrounded by.

The Leader first met with Stephen McDermott who had just descended from his boat at the Harbour with his two lovely cocker spaniels in tow.

“I’m travelling from Dublin and came up to Clondra from Lanesboro,” he said, before pointing out it’s a trip he takes regularly.

“Opening up the Royal Canal has been a fantastic development; when we arrive here, we stay on the boat here in Condra Harbour for a few days; we usually spend a week on the boat and take in Athlone as well.”

Meanwhile, Frank Cryan from Dublin was in Clondra last Friday to cycle the wonderful cycle paths that have been added to Co Longford’s tourism trails in recent times.

He had done a cycle trail in Co Waterford the day before and decided afterwards that he would head to Co Longford and see for himself what the county had to offer to avid cyclists like himself.

“I just did the Greenway from Dungarvan to Waterford and I decided to come up to Longford because I have been hearing a lot of good things about cycling up here,” he told the Leader.

“It’s my first time in Longford would you believe and I am delighted to be here.”

He and his companion had travelled down through Upper Lough Erne and passed no less than 25 locks along the way.

They were also chilling out with a few beers and gearing up for a competitive game of poker when the Leader caught up with them on Friday evening.

“Oh we have been here before,” said Paul, before pointing to the fact that he has moored Aontroim Abú in Clondra Harbour a number of times since the Royal Canal was opened up.

“We love the area; we come down, stay on the boat here and relax for the week.We will do a bit of fishing too, but mostly we will relax.”

Over by the bridge, Polly and John Starr from Tasmania were relaxing with a beer when the Leader approached them.

They were in Ireland for three weeks and planned to head for Italy then for a further seven weeks.

It was there first time to visit Ireland and they were blown away by the natural beauty they discovered right here in Co Longford.

“We also brought the best weather with us,” laughed John before pointing out that the couple came to Clondra because of an amazing B&B they had heard about!

“We like to find accommodation and stay away from the main tourist areas when we are travelling.”

He went on to say that they had experienced the “most amazing walk” along the Royal Canal earlier in the week and described the area as “stunning”.

An officer in the Navy, John said the experience here in Longford has been so different to other typical tourist destinations.

“It’s the real Irish experience here and the next stop for us will be Lahinch and then on to Killarney.

“We have really loved it here in Clondra; it is so peaceful and we have really gotten to enjoy the people and the culture.”

Longford to become mecca of the midlands with tourism drive