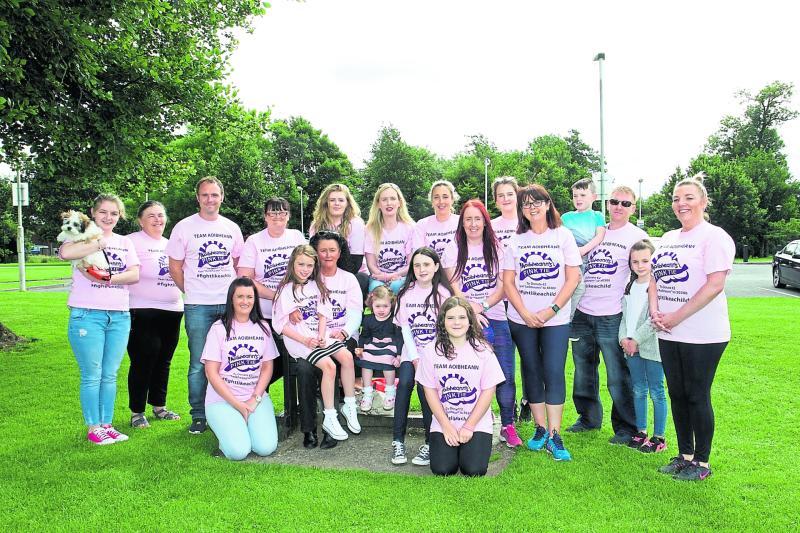 Longford town resident, Chelsea Harte has rounded up a number of women and men in her area to run this year’s Longford Marathon in aid of a very special cause.

Chelsea’s 15-year-old daughter Toni died 12 weeks ago after battling Leukemia for 15 months.
And, during Toni’s illness and her stays at Crumlin Children’s Hospital, Aoibheann's Pink Tie provided enormous support to the family.

Running this year’s marathon provides Chelsea and all her family with an opportunity to “give something back” to the organisation, which the Harte’s say is a charity that is totally undervalued.

On marathon day, the team will have a number of women who will run the full marathon; others including Chelsea will run the half marathon while the remainder will participate in the 5km or walk the route.

“We are running the marathon in Toni’s memory but it is also providing us with an opportunity to raise awareness around the whole issue of childhood cancer and for Aoibheann's Pink Tie,” said Chelsea speaking to the Leader this week.

“Toni was diagnosed on Easter Monday 2016; she had no symptoms whatsoever before hand, she just got a nose bleed in the bathroom.”

An ambulance was called and Toni was taken to the Midland Regional Hospital, Mullingar where her bloods were done.

A full diagnosis was determined the next day in Crumlin and the Harte family’s lives were to change forever.

Toni was initially treated for two weeks at the hospital and then sent home.

She began a course of chemotherapy which meant that she and her mum travelled up and down to Dublin when necessary.

“After a lot of ups and downs Toni came home and returned to school; however she became seriously ill at the end of last December.,” Chelsea continued, before pointing out that before long her daughter was readmitted to hospital.

“She stayed in hospital for six months and while she had a lot of highs and lows during that time she remained strong and focused on her recovery. “

Recovery was not to be, however, and 15-year-old Toni passed away at home surrounded by her mother, sister Shannon (22), family and friends towards the end of May.

She was a student at Templemichael College and a member of Longford School of Rock.

Toni was also very involved in Attic Youth Café and was member of a number of local committees.

She was always endeavouring to better the lives of everyone and indeed, everything around her.

Aoibheann’s Pink Tie was very supportive to Chelsea and Toni during those 15 dark months in the lives of the Harte family.

The national Children’s Cancer Charity was set up in 2010 by Mick Rochford and Jimmy Norman after the tragic loss of Jimmy’s daughter Aoibheann to cancer at the age of 8.

During Aoibheann’s year long battle with the disease, the family found little or no financial or practical support for children and their families.

Jimmy and his family had a large support network of friends and family but found that many on the ward had virtually no support at all.

They established the charity in an effort to combat these difficulties.

“Aoibheann’s Pink Tie does such great things for families; very simple practical things that mean so much when you find yourself in a situation where your child has cancer and ends up in hospital,” continued Chelsea.

“They might help you with a bill; maybe bring in pajamas - things that we all take for granted but mean so much in a hospital setting.

“They also provided emotional support as well, coming in for a chat and having a cup of coffee for example - just fantastic so they are.

“At Christmas time they sent us a hamper which came in so handy as we spent time in hospital over Christmas,” said Chelsea.

There are other acts of kindness by the charity that are too numerous to mention, but Chelsea is adamant that the important and necessary work Aoibheann's Pink Tie does is not recognised enough.

The marathon gives her the opportunity to raise some much needed funds for the charity and to remember her beautiful daughter who is never far away despite everything.

Fifty sponsorship cards are circulating around Longford town and its environs at the moment by the ladies in an effort to raise those valuable funds for the charity.

All money collected will be handed over to Linda from Aoibheann’s Pink Tie who is doing the 5km on the day.

All support will be appreciated and Longford Marathon takes place on August 27, 2017.

Also: Longford girl gets the chop for charity