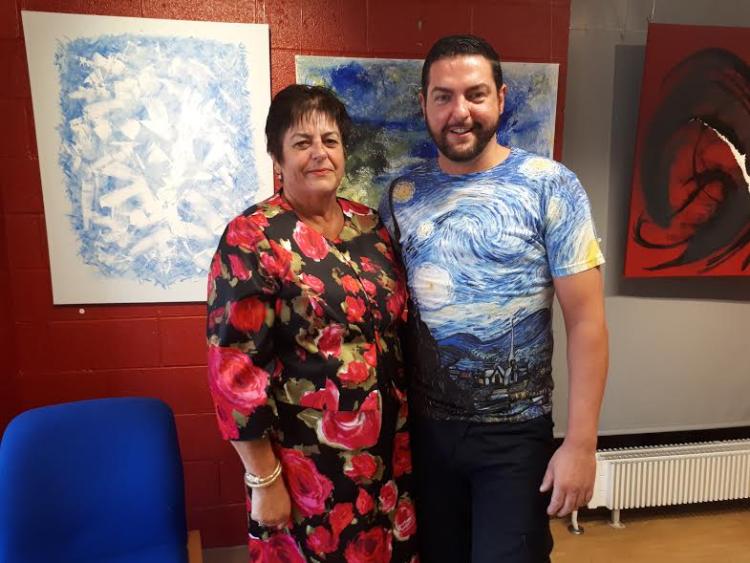 The exhibition has been inspired by the artist’s mother Ann who was born at the mother and baby home in Castlepollard in 1950.

“We are alike in so many ways; she even likes to dabble in pastels and watercolours occasionally - so the apple doesn't fall far from the tree.”

And indeed it appears that his sentiments are true because Ann is a wonderful artist and a person who, it has to be said, has dealt with more challenges in her 67 years than most.

When Ann was born to a young mother who became pregnant outside of wedlock it was a dark, harsh and unforgiving society that she entered.

Pregnancy outside of marriage was taboo and brought the wrath of shame on families when it happened.

It was the norm, back then, to get rid of the problem, so to speak.

Women were sent to England or further afield to give birth and often ostracised from the family home and their communities.
Others went to the mother and baby homes here in Ireland; places of horror as we now know.

In Ann’s case, her grandmother brought her mother - Catherine Roberts - to the home in Castlepollard and after Ann was born, her mother was returned to the family home.

Ann was left behind and later placed up for adoption in Northern Ireland.

“It was for society reasons that my mother ended up in the mother and baby home; she got pregnant outside of wedlock,” Ann told the Leader.

“You see, that was the disgrace over,” remarked Ann referring to the fact that in those days once the birth of the child had taken place at the home, the mother was sometimes returned to the family fold.

“That was the way it was back then.”

Ann, however, stayed at the mother and baby home for a number of weeks and was then placed up for adoption at the Nazareth in Belfast.

At six weeks old she was adopted by John and Madge Hughes.

But she was a very delicate child, having suffered malnutrition while at the mother and baby home in Castlepollard.

“Whether it was neglect or whatever, I ended up very ill anyway,” she recalled.

“I had gastroenteritis and was on the verge of death when I arrived in Belfast.

“The fact that I was so sick probably saved my life actually; it saved me from that home.”

Her adoptive family was a very loving one and she was cherished and cared for by them.

Ann’s birth mother meanwhile went on to have five more children and the family later left the homestead in Portadown and emigrated to America.

“My adoptive parents were lovely people and I idolised my father; they saved my life,” Ann continued.

There is no denying that Ann was well looked after.

She had an adopted sister, was educated, had friends and was a happy youngster, teenager and young adult.

She qualified as a psychiatric nurse and spent many happy years working in her caring role in Northern Ireland.

She married and went on to have seven children including her son Ambroise who is fast becoming an established artist on these shores.

It wasn’t until she had her own children that she began to think more about her own birth mother and she began a to make enquiries.

She was in her late 30s, early 40s when she embarked on this new journey.

“A lovely nun helped me with the search,” she smiled, recalling those initial days into the investigation.

“It was difficult to find my mother initially because she wasn’t in Ireland.

“But the adoption agency I was involved with were trying to reconnect people at the time and so we just kept on going.

“When I found my mother, I discovered that I had six siblings.”

Most are living in Ireland, however one sister is in the US.

Ann says she has suffered terrible shame over her circumstances, despite the fact the attitudes have moved on and somehow Ireland has managed to become a more compassionate and forgiving society.

She is now looking forward to meeting her sister Rita who will travel over from the States next year for a reunion.

Ann also discovered who her birth father was and that journey took her to Canada.

“He was a local lad and, when my mother went into the home to have me, he emigrated to Canada,” she added.

“He had no family, but had a great life in Canada; he owned a big ranch, but unfortunately when I tried to make contact, he didn’t want to know.”

Never a dull moment, as they say, and certainly Ann has had her ups and downs throughout her life.

Her marriage ended a number of years ago, but as she says herself, it’s her own children that keep her going now.

“They really are great kids,” she added.

There was also plenty of nostalgia last week for Ann when she accompanied Ambroise to Longford for his exhibition.

Castlepollard is only a few miles up the road from Longford town and, as Ann remarked, there was certainly plenty of irony in her trip to this county.

She has travelled around the area and seen all the local beauty spots during her time here.

“It is so beautiful,” she added, before chastising herself for forgetting her camera!

Ann is also very proud of Ambroise and it seems his artistic skills are definately a chip off the old block.

Ann too, is a talented artist and one of her paintings forms part of Ambroise’s exhibition.

“I was always arty, particularly in school,” she smiled before pointing out that she always encouraged creativity in her children.

She says she has become a much stronger person since she embarked on her journey to reconnect with her past.

“Nothing shocks me anymore,” she laughed.

“I am strong; I’m not that easy annoyed and I would be a very open minded person.”