Longford Lives: 'Everyone’s a winner when people with disabilities reach their full potential' 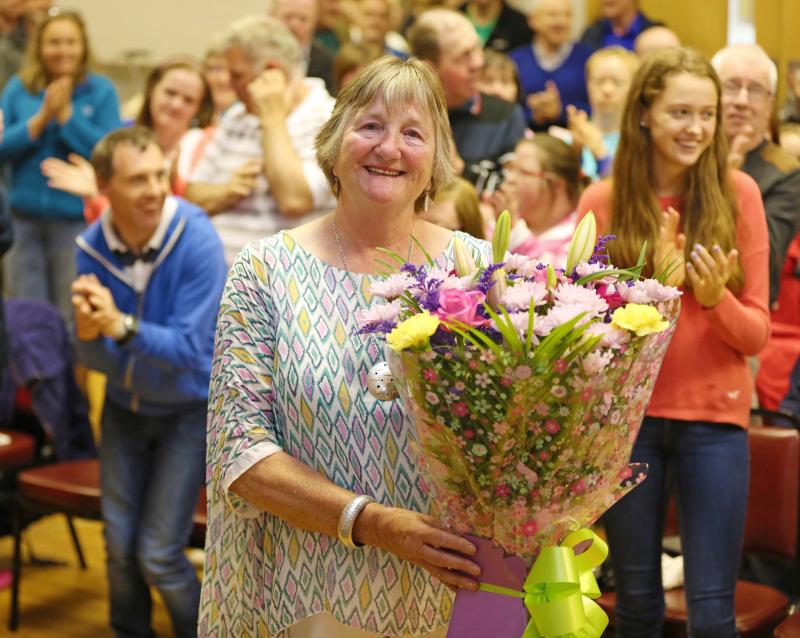 A native of Co Laois, Oonagh came to Longford in 1973 after qualifying as a PE teacher.

She took up a position at Scoil Mhuire in Longford town and taught there until 1979.

In 1976 she fell in love with a Ballymahon man - Liam Flynn - and the pair married that same year.

The couple had their first baby, Barry, in 1979, and went on to have two more children, Colm and Carole.

Oonagh’s affiliation to St Christopher’s Services, however, began as far back as 1975 when the then principal rang her and asked her if she would be interested in doing voluntary work in the area of physical education at the facility.

The Co Laois woman quickly established herself at St Christopher’s as a person with vision and one who had a great understanding of the needs of both the students and clients who attended the services.

She set up swimming classes and continued with this throughout 1979.

Meanwhile, out in Ballymahon where she resided, Oonagh established gymnastics and a Girl Guides Club.

“I am a firm believer in exercise and the importance of nurturing our physical health,” she told the Leader, before pointing to the fact that throughout the 1980s her hours began increasing at the special school.

Then in the early 1990s she began a job share initiative at Cnoc Mhuire in Granard.
For the first time in 18 years she was back working with teenagers and she absolutely loved it!

She also held a great grá, as they say, for the secondary school in Granard.

Then, in 1997 Oonagh became a full time employee at St Christopher’s Services in Longford town and the marvelous work that she did there is evidence to this day.

“In the classroom at St Christopher’s the needs were different, but all children needed exercise and my main aim at the school was to help them reach their individual potential,” she added.

“Even if that potential came more slowly, my focus was on their ability, not their disability, so if they needed a wheelchair, or a swing, I got it for them.”

Modest to a fault, Oonagh says that she is merely a tiny cog in the “bigger picture” at St Christopher’s Services.

“There are so many great people there - people with great vision and wonderful skills ,” she added.

Meanwhile, and as the recession began to bite, funding cuts in the health service became commonplace and the special needs services in Longford town were no exception to those cuts.

Those cutbacks came hard and fast and as Oonagh pointed out: “At times in St Christopher’s there was so little money in the kitty, I knew I would have to fundraise in order to get the equipment that the clients' needed.”

And fundraise she did!

In 2012 St Christopher’s Services special school won a national award and it was one that put the facility on the special needs care map of Ireland.

“This award was for the best sports programme in the country,” smiled Oonagh, before pointing out that it was the financial contributions and voluntary support provided by the people of Longford and local businesses that enabled the facility to win that much coveted accolade.

“That award really put St Christopher’s on the map.”

When Oonagh began her career at the special needs school back in 1975, there were 15 students in attendance.

Now there are 200 and the numbers continue to rise.

Throughout the years, too, Oonagh was very much to the fore when it came to fundraising initiatives.

Because she was on the ground, so to speak, Oonagh knew what the clients needed in terms of equipment and other supports, all of which, she knew would enable them to reach their individual potential.

In 1995 she trained a group in Ballymahon to raise funds for special bikes that became necessary at St Christopher’s Services.

She also got in touch with Longford Sports Partnership, which she added, has been a committed supporter of the services’ school ever since.

The support provided by the local sports partnership enabled Oonagh to introduce the students and clients to rope climbing, soccer, kickboxing and much more!

And the students at St Christopher’s began to thrive.

Recently the school also acquired a very special swing which was imported from Australia.
This served as a huge boost to those at St Christopher’s Service and to the staff there, who it must be said are always on the lookout for additional supports for their clients.

“We would not have gotten it were it not for the support of the people and businesses of Co Longford; we are so, so grateful to all of them.

“The swing will improve the lives of so many of the clients and that is what it's all about - helping them to live their lives to the best they can by helping them to reach their individual potential.”

Over the past 42 years, there have been many highlights at St Christopher’s Services for Oonagh.
And, there is no question, that the highs have definitely outweighed the lows.

A visit to the outdoor pursuits centre in Achill, Co Donegal is one such highlight that springs to mind while she speaks to the Leader.

“All the students were able to participate in activities like wind surfing; caving, bodyboarding, and it was such a wonderful experience for them all.”

Another high for Oonagh were the many wonderful sports days that were held at the school.
“I would contact different celebrities every year to come along to the sports days and present the medals and we had great fun,” she smiled, before pointing to the many exciting school summer camps where she teamed up with TY students at Cnoc Mhuire in Granard.

“The ideas were great and we achieved so much and had great fun.”
Looking back now on a career that spanned nearly half a century, Oonagh says it has been a wonderful experience for her.

“It’s important, “ she continued, “that when we use local resources, the skills are there. Tennis, for example would have been taught at St Christopher’s and it is also worth pointing out that we have the best wheelchair changing rooms in Ireland at Longford Swimming Pool.

“I am also aware that the equipment we have at St Christopher’s is unbelievable,” continued Oonagh who approached Fitzwilliam Tennis Club and encouraged them to donate some tennis nets to her school!

“The last 42 years have been such a joy for me.

“I got such a thrill from my work and I feel very privileged to have worked at St Christopher’s.”
She also paid tribute to the late Sylvia Dawson, and Esme McCord - two local women who had the greatest vision of them all when it came to St Christopher’s Services.

“There is absolutely no reason why people with disabilities can’t cycle, dance or play sport,” she added.

“Everyone’s a winner when people with disabilities reach their full potential.

“There is no reason why people with disabilities can’t integrate into the community, but the resources must be in place, of course, for them.

“I am a firm believer in fitness and despite my retirement, I intend to keep moving; so many people sit down when they retire, but I plan to keep moving.

“I plan to cycle the canal and continue playing my golf.”

The Laois woman also thanked the wonderful staff and the board of management at St Christopher’s Services for all their support through the years.