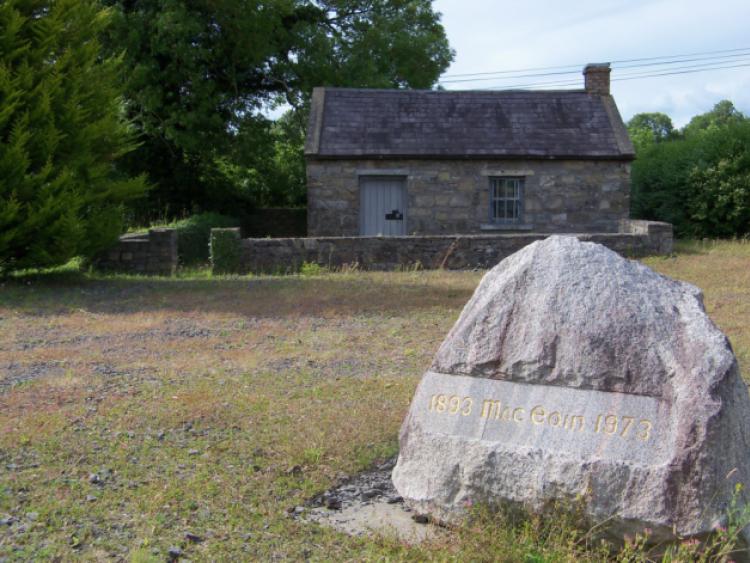 Today in Ballinalee the late Thomas Ashe was commemorated with a dignity and pride that will be forever remembered.

And, this week as the 100th anniversary of the revolutionary’s death is commemorated and the centenary of his presence in north Longford marked,  it was fitting that today’s events coincided with his famous speech, orated in Ballinalee on July 22, 2017.

Ashe was described by David Leahy - whose family are closely connected to Ballinalee - during a lecture at the Thomas Ashe Hall in the village this afternoon, as a “national school teacher, a member of the Gaelic League and Irish Volunteers, the hero of Ashbourne, President of the Irish Republican Brotherhood, the hunger striker, poet and patriot”.

“All of these events,” said Mr Leahy can be tracked back to the time that Thomas Ashe was here in Ballinalee and in Granard.

“He inspired many with his words, his deeds his ideals and he certainly lived up to the Ashe family motto - ‘Not For Ourselves, But For All’.”

Earlier in the day, General Séan McKeon’s forge was opened up to the public after recent renovations at the site and, this evening, Ashe’s grandnephew Padraig, spoke to those gathered after a brief ceremony in which the tri-colour was raised and the Ballinalee Players re-enacted the events of that famous speech 100 years ago today.

Thomas Ashe's famous poem ‘Let Me Carry Your Cross for Ireland Lord’ was also recited on a number of occasions today.

Let me carry your Cross for Ireland, Lord

The hour of her trial draws near,

And the pangs and the pains of the sacrifice

May be borne by comrades dear.

But, Lord, take me from the offering throng,

There are many far less prepared,

Through anxious and all as they are to die

That Ireland may be spared.

Let me carry your Cross for Ireland, Lord

My cares in this world are few.

And few are the tears will for me fall

When I go on my way to You.

Spare. Oh! Spare to their loved ones dear

The brother and son and sire.

That the cause we love may never die

In the land of our Heart's desire!

Let me suffer the pain and shame

I bow my head to their rage and hate,

And I take on myself the blame.

Let them do with my body whate'er they will,

My spirit I offer to You.

That the faithful few who heard her call

May be spared to Roisin Dubh.

For Ireland weak with tears,

For the aged man of the clouded brow,

And the child of tender years;

For the empty homes of her golden plains;

For the hopes of her future, Too!

for the cause of Roisin Dubh.

Today's proceedings in Ballinalee were run in conjunction with the Longford Creative Plan and Longford Co Council.

For more on this story, see next week’s Longford Leader, on sale Wednesday.