Lanesboro's Seanie reveals why his chips are the best in Longford 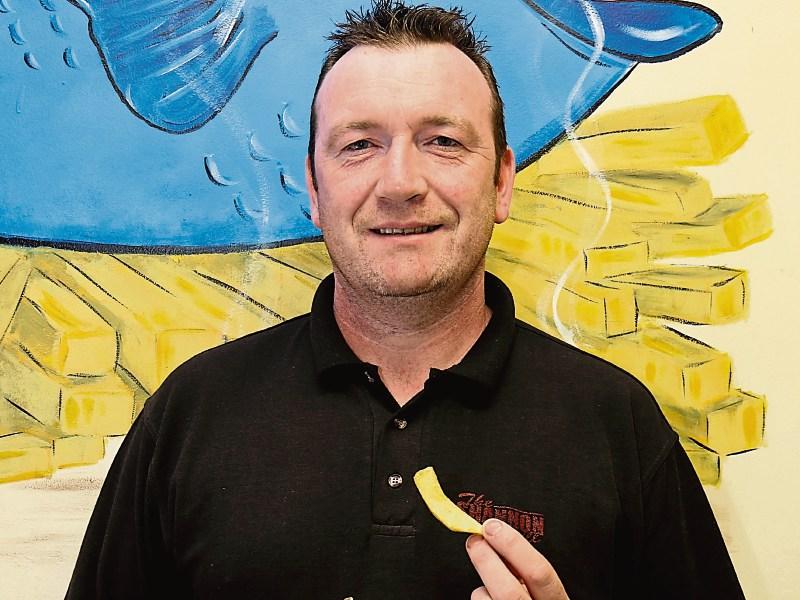 National Fish and Chips Day took place on Wednesday May 31 last and the Longford Leader went on the hunt for Longford’s best Chipper in the county.

We found it too, thanks to our poll, which saw over 1,600 people vote in a couple of days.

And the winner, with a whopping 33% of votes, was Shannon Grill (Seanie’s) in Lanesboro.

Shannon Grill, run by Seanie Mimnagh for the past 13 years, is a small chipper in the village of Lanesboro.

“I really thought the chippers in Longford town would surge ahead in the latter stages of the poll, but thankfully they didn’t,” Seanie told the Longford Leader last week, adding that he’d like to thank everyone who voted for him.

The Shannon Grill uses only the best quality fresh potatoes - provided by local supplier, Fresh ‘n’ Ready Vegetables - which are peeled and chipped on a daily basis.

“The key point, I feel, for great chips is the correct temperature and cooking time. This leaves the chips with a crisp outside and a good fluffy inside,” said Seanie.

“Chips here are cooked to order, so there is a bit of a wait, and can only be done this way as I don’t cater to anywhere near the numbers that the chip shops in Longford do.”

The staff, according to Seanie, are a great help and carry out their work “to the finest detail”, which Seanie says is very important when it comes to cooking the food.

Luigi’s and Macari’s Deli Burger (both in Longford town) were strong competition for the small chipper in Lanesboro, coming in second and third in the poll respectively.

Luigi’s received 25% of the votes, with Macari’s coming in third with 22%.

Despite the rivalry in the Longford Leader poll, Seanie made it clear that Peter Vocella from Luigi’s was a huge help when the Lanesboro-based businessman was starting out.

“When I decided to try my hand in this very difficult game, he was always on the end of the phone, or if I was stuck for something, he would oblige in a heartbeat.”

Gratzy's Chipper was also a popular choice, with 10% of voters choosing the Aughnacliffe chipper in the poll.

“It’s great to see a small takeaway able to compete with the iconic chip shops that are Luigi’s and Macari’s - there’s hope for small businesses still,” said Seanie.

“Once again, thanks to all that voted and to the people of Lanesboro for the loyalty shown.

“I’m very proud to have won this poll and it means a lot to me and my family.”

So, if you're looking for a delicious bag of chips to enjoy this week, well  you know where to go, don't you?