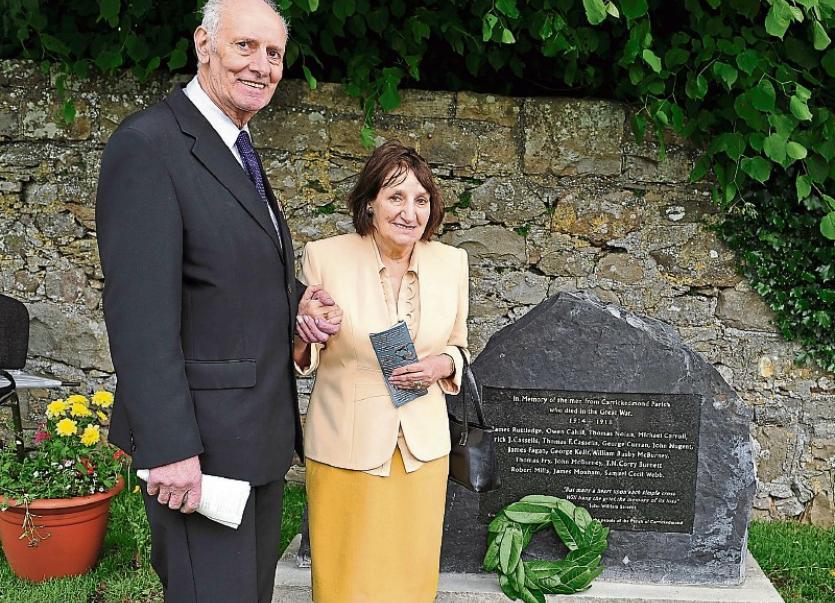 Poignancy and sentiment were arguably the two manifest emotions to take from the south Longford surrounds of Tashinny last Sunday as locals came out to commemorate those who fought and died during World War One.

In memory of the 17 men from the parish of Carrickedmond who lost their lives during the Great War, a memorial was unveiled, much to the delight of the sizeable crowds that turned out for the ceremony.

The attendance included many relatives of men who were commemorated, some of whom had travelled from Dublin and other places outside the county.

The unveiling was followed by a reception in Tashinny NS where there was a display of art work done by pupils from both schools.

The memorial itself  was produced by Patrick Gogan and funded by Ballymahon Municipal District.

In thanking all involved, the Cathaoirleach, Cllr Cahill referred to the major part played by the schools. “I must thank the pupils and teachers for their wonderful work, and Eamonn Brennan who helped to co-ordinate the project in the schools,” he said. Cllr Cahill also thanked Creative Ardagh for facilitating a session with the pupils.