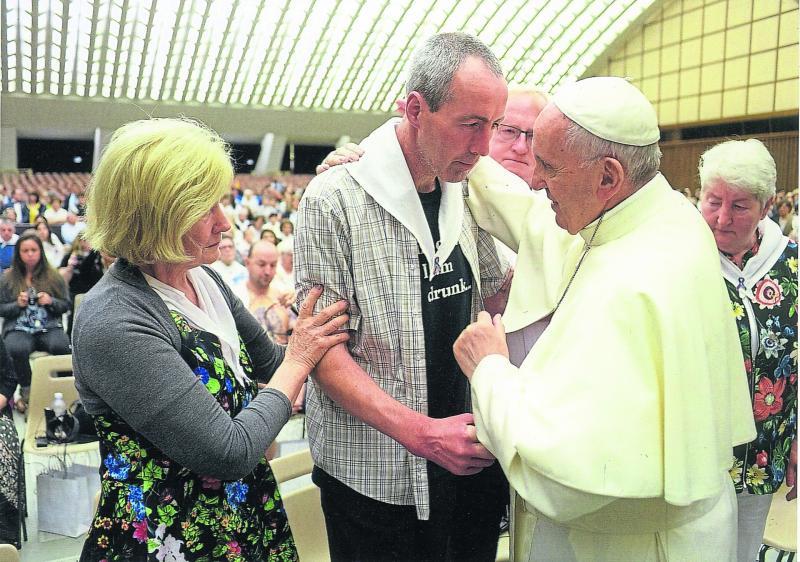 Last month one Longford man and his mother were in the Vatican for an audience with Pope Francis.

Joe Doran from Cullyfad and his mother Pauline were part of a Huntington’s Disease contingent from across the globe that met with the Pope in Rome.

Joe, who is in his 40s, was diagnosed with the disease about 10 years ago; Pauline is his carer.

“It was a great honour to meet the pope,” Joe told the Longford Leader this week while Pauline said she found the experience both surreal and moving.

Pope Francis is the first pope to publicly recognise HD, and he invited families from Ireland and around the world for a historic audience at the Vatican on May 18, last.

The Pope greeted and embraced each person with HD and their family members on the day.

Meanwhile, back in Longford, Joe is preparing for his annual walk - The Joe Doran HD Awareness Walk - which takes place at Lough Key Forest Park in July.

Joe likes to run the walk to coincide with his father and brother’s anniversaries.

His father died 20 years ago and his brother John who was a street performer in Galway passed away following a car accident in 2003.

“HD makes you tired all the time,” added Joe before pointing out that he likes to walk as much as he can with his beloved dog Nanooke.

“If I didn’t walk I would end up in a wheelchair.”

Joe receives a lot of support from the HSE as his illness continues to progress.

He has a personal assistant - Joe Egan from Independent Living in Longford - who provides a number of hours of care while the Alzheimer's Society in Longford also provides Pauline with some respite hours.

Joe attends regular appointments with a dietician and physiotherapist.

“We are very grateful for all the help and support that Joe gets,” said Pauline, before paying tribute to her daughter Anne and her brothers, sisters and their families who are also very caring and supportive to Joe and Pauline.

“HD can shorten a person’s life; children and teenagers can get it as well.”

Caring for someone with HD is a 24/7 job despite the fact that those with the illness are provided with as much independence as possible.

Pauline cooks Joe’s meals, she drops him to hospital appointments and to the various courses and local centres that he attends.

She also helps with his personal care while Joe is encouraged to make his own breakfast in the mornings.

Pauline says that while her son’s determination to be as independent as possible is very admirable, she is always conscious of the fact that his balance could go at any time and, as a result of this, he could fall and injure himself.

“If he were to break bones for example, they probably wouldn’t heal very quickly and that would be problematic in itself,” she continued.

“Joe walks, goes swimming and joins in as much fundraising as he can.

“He does the parkrun every Saturday and keeps active; in fact he could spend hours walking every day.”

Joe Doran also loves gardening and boasts his own polytunnel which is packed to the brim with assorted vegetables and delicious strawberries!

“Routine is essential for someone with HD,” Pauline continued before pointing out that the disease was a genetic brain disorder which is currently incurable.

“It causes brain cells in certain parts of the brain to die, resulting over time in involuntary movements, personality and mood changes and slurred speech.

“Cognitive changes result in a decreasing ability to plan and organise and to maintain mental flexibility.

“Many people may also suffer from psychiatric symptoms such as depression and anxiety.”

But before long both Joe and Pauline are back to chatting about Pope Francis!

“It was unreal to be honest; when you talk about the Pope it is like a picture of him, but for us we were up close and personal,” smiled Pauline.

“Joe was quite taken with him; he found him to be a very honest and sincere person.

“I was totally gobsmacked to be honest.”

On the day, the Pope chatted to everyone from the Huntington’s Associations across the world, individually, and then presented those in his attendance with Rosary beads and a blessing.

“It was very moving to be so close to a person who is so eminent,” smiled Pauline.

“Joe and my brother were also very moved by the experience.”