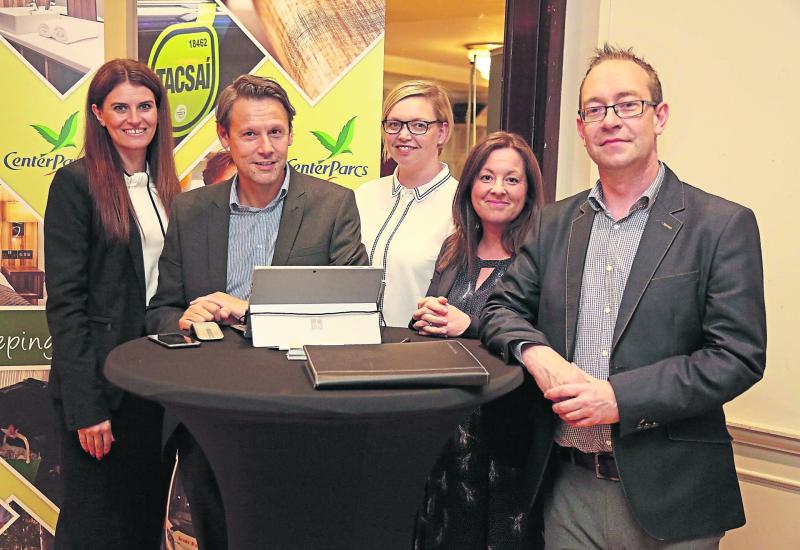 More than 200 local businesses have registered their interest in landing a lucrative contract with Center Parcs in the lead up to its Longford Forest opening in 2019.

That was the estimated number of firms who attended two days of open meet and greet events in Mullingar and Longford last week.

PR Manager with the UK based leisure operator Simon Kay said the forums were part of the latest chapter in the broader Center Parcs story.

“There has been a huge range of goods and services and different suppliers that have come to see us,” said a visibly upbeat Mr Kay.

“The purpose for us being here is for us to understand what’s out there in the local and regional market, what kind of suppliers there are and what types of goods and services we will be able to procure locally.

“It's also a chance for the local business community to understand the types of goods and services we are going to need.”

A key indicator of just how strongly Center Parcs chiefs placed on the two day affair was evidenced by its decision to fly its entire procurement team in from the UK to speak to potential suppliers.

And while Mr Kay said he was optimistic the vast bulk of successful suitors would come from within the Longford-Westmeath catchmentarea, there was still a rigorous vetting process ahead.

“We are really confident (majority of suppliers will come from within the local area).

“We are not here to offer contracts here and there is a process that needs to be gone through but certainly the signs that we are seeing amongst the suppliers coming in is really positive and encouraging for us.”

In terms of bodies on the ground, just two employees namely its general manager Daragh Feighery and a general services manager have so far been added to the Center Parcs payroll.

Efforts to start a more comprehensive recruitment campaign by filling around 1,000 full and part time positions are more aspirations than immediate targets at this stage however.

A large slice of that relaxed approach is manifest in the company's proven track record in not only building but sustaining five holiday villages in the UK and another 21 across mainland Europe.

“The big chunk of employees will be operational working in housekeeping, food and beverage, shops, pool and what have you but until you have got the lodges, pool and everything else in place we don’t want to recruit too early because we don’t people and then have them standing around doing nothing.

“The main chunk (of staff will be recruited in) late 2018 early 2019 because that then gives you time to train them in at the time when building work is completed.”

Ongoing speculation over the prospect of the national gas pipeline coming to Longford is something Mr Kay admitted he remains “none the wiser” over.

His take on another ceaseless intricacy, namely Brexit is a topic which conjured a more forthright response however.
“Brexit will be as it is,” he said.

“The message we want to get across is that we are a long term investment and yes it the currency fluctuations might put some increase in costing but we will budget for that and overall we don’t see Brexit having any impact on this project.”

It's a mantra that has, of course, been rhymed out before, but it's one he and his fellow Center Parcs chiefs clearly intend seeing through.