Ahead of the arrival of the An Post Rás to Longford, John Doherty recalls the career of local cycling hero John Lackey 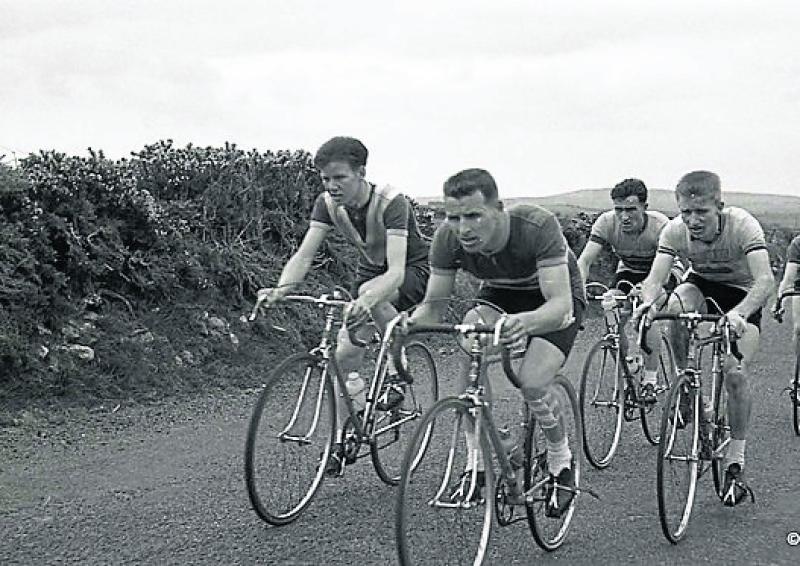 The late Longford cyclist John Lackey, from Soran, a star of the Irish amateur cycling circuit during the 1950s and 1960s.

The welcome arrival of a stage of the An Post Rás to Longford on Sunday, May 21 will evoke some great memories of an Rás Tailteann coming to Longford in the fifties and the great interest that it aroused in the county and especially, in the parishes of Killoe and Ballinalee.

There was, of course, a special reason for that great interest in a race that always captured the interest and imagination of crowds all over the island.

One of our own, the late John Lackey, was a star of Irish amateur cycling in Ireland at that time.

John Lackey was born in the townland of Soran which sprawls the parishes of Killoe and Ballinalee. Both parishes lay claim to him but in truth, he is a Killoe man.

Either way, the people of both parishes were extremely proud of him. As was indeed I’m sure all of county Longford. He was the superhero of the time and rightly so.

Grown men, dressed in their best Sunday suits, lined the road at Doherty’s Cross to show their respect and support for the ‘savage road man’ as he was affectionately known.

Each one saw their own Lackey in the peloton as it buzzed past in unison like a giant swarm of bees, heads bent, backs arched, and legs rhythmically pumping. The older folk knew the Lackey family personally.

Many had been friends with John in their younger days and then of course the younger men, if they owned a bicycle, swarmed around the Esker roads being Lackey for a day. The overwhelming feeling of young and old was one of extreme pride.

The fifties were a very harsh and frugal time. Austerity was the reality even if we didn’t know its name. John Lackey and sporting heroes like him gave people a break from the constant drudgery that was rural life in Ireland at the time.

Most of our heroes came via the old pye or cossor radios which brought us news of the great Rackard brothers’ Wexford hurling team, the Purcell Stockwell Galway team, Vincent O’Brien and the Taffe brothers in horse racing, Names like Cantwell, Hurley, Haverty, Saward, McEvoy, Whelan in soccer.

Strange names and faraway places but Lackey, he was different. We didn’t have to borrow him from anywhere. He was one of our own. I doubt that John ever knew that we thought so highly of him or that he engendered so much pride.

John Flanagan, writing about him in his book on the great Shay Elliot, says that although John was a larger than life character he was an intensely private man. You could meet him on the street of Ballinalee and not know him. He had been there and done it all but he didn’t wear the tee-shirt proclaiming the achievements.

I doubt that he would have been a Facebook or Twitter man if such were in vogue in his time!

John Flanagan of the Dublin wheelers himself an outstanding cyclist rode with John on the Irish national team in the ten day stage race Route De France in 1954. He speaks very highly of John saying he was a natural leader and motivator, who commanded tremendous respect from his teammates and inspired great loyalty. He was captain and chief motivator of the Tailteann cycling club.

He also refers to his great generosity of spirit and that he would be equally exuberant at the success of his team mates as he would be for his own success. It was a measure of the character of the man.

His record of achievement stands for itself. It is truly amazing that he competed against the best not just on this island, but across Great Britain and the Continent.

He was the winner of over two hundred races. He was what was termed in racing parlance a “savage roadman”. He could maintain a torrid pace for long periods, he could climb, sprint, he had it all. He was twice third in general classification in the Tour of Ireland.

He was second in the 1955 Tour of Ireland losing out by only 42 seconds to Brian Haskin of Great Britain. The tour was finishing in Longford that year. The fairy tale ending that the huge crowd of Longford people who thronged the county town to welcome their hero home was not to be.

The 1954 tour was rated the toughest ever, the weather was outrageous right through the week, not much has changed in that respect, and of the 108 cyclists who started only 15 actually finished, and John was one of them. He competed at a time when the country had a surfeit of brilliant cyclists, Shay Elliot being the best known.

They were great rivals regularly sharing the podium before Elliot left to pursue a very successful career both as an amateur and professional cyclist in France. Elliot was of course the first Irish man to wear the yellow jersey in the great Tour de France.

Appropriately John was the first winner of Tour of Wicklow, a race inaugurated to honour the memory of Shay Elliot in 1958. It is regarded as the toughest one day event in the whole cycling calendar, the great Sean Kelly won it twice in later years.

In 1961 John became the first rider from the republic to win the Tour of the North breaking the stranglehold of the top British riders who had hitherto made it their preserve.

His list of achievements is very impressive. There is no doubt that John reached the zenith of his sport. That he achieved this at a time when there were no sports councils, no high performance grants or sponsors makes it all the more remarkable.

When he finished cycling John managed and organised many stage races and was Tour of Ireland director for many years. He was also first to introduce a young Sean Kelly to international cycling picking him on an Irish team for the tour of Britain. Kelly won a stage, it marked the beginning of a glorious career.

John Lackey was truly a superstar whose achievements should not be just consigned to the cycling archives.

It is to be hoped that Longford County Council, the communities of Killoe and Ballinalee and indeed people across the county can combine to have a fitting memorial erected to his honour in the not too distant future.

It is fitting that this An Post Rás will come past John’s birthplace as it travels through Ballinalee and Killoe on its way to Longford.

Each County Council is now being granted a sizeable sum of money to commemorate some famous event or person from the past. John Lackey would be a worthy recipient and indeed could engender a major spin off for the local economy were a cycling event organised in his memory.

Bray do it for the late Shay Elliott why not Longford for one of its greatest ever sportsmen?

John, you’re gone, but you should never be forgotten.