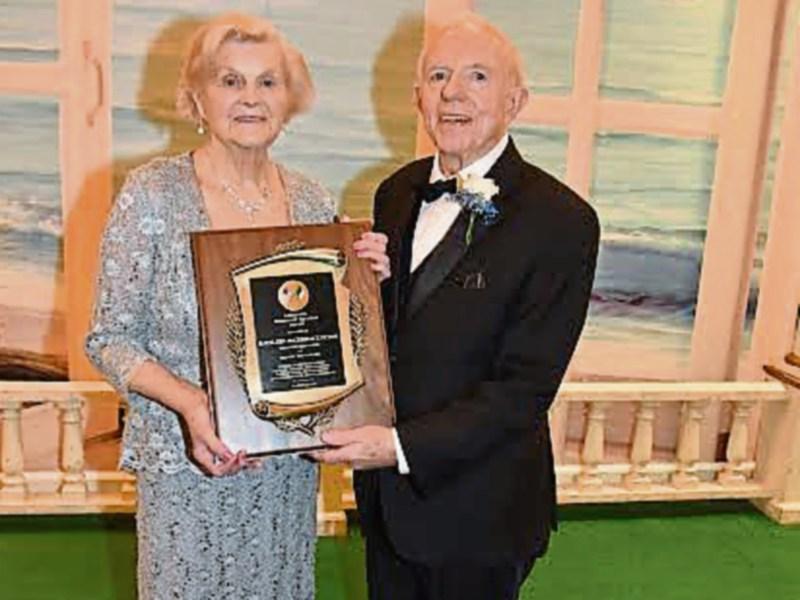 An Edgeworthstown native who has been living in New York since the 1940s became this year’s Longford County Woman of the Year after she was nominated by the County Longford Association of New York.

Kathleen Flynn (nee McCormack) was honoured at an event which took place at the Astoria Manor, in Queens last month.

Mrs Flynn has been living at East Northport for the last 41 years and left these shores with her sister Mamie (Kane) when she was in her early 20s in 1949.

Indeed it was Mrs Flynn’s involvement with the Irish community in Queens and her tireless work in the promotion of the Irish culture in New York that earned her the Longford County Woman of the Year title.

It was 1949 when she arrived in New York city with her sister and the country they had just left was in a state of economic flux.

The pair went to live with their uncle, Eddie Reilly who was residing in Queens at the time.

It was he who helped the sisters establish themselves in the US and Mrs Flynn says he was a wonderful support to all of them.

The Edgeworthstown woman qualified as a psychiatric nurse when she completed her national schooling here in Longford and subsequently went to work at St Loman’s Hospital in Mullingar for a couple of years before embarking on her journey to the US.

“When I came out to Queens, I continued working as a nurse for some time and I enjoyed it,” she added, before pointing out that she later met and married her husband John Francis Flynn, a native of New York.

“Myself and my husband opened an Irish bar then in Queens; it was called Flynn’s Irish Inn and we ran it together for over 20 years.

“We met so many people from Longford and from all over Ireland there, during that time.”

Together the couple had three sons Stephen, Jeffrey and Jimmy, but tragedy struck the family when John Francis passed away in 1992.

It was Ms Flynn’s strength of character together with the support of her many friends and associates in Queens, that got her through the dark days of grief.

These days she enjoys spending time with her three grandchildren, and her great-grandchild who was born on January 1, 2017.

“I am very involved in the Irish functions here, especially those associated with the Co Longford Association of New York,” she continued.

“I have been involved for the last 20 years; I was one of the first of my generation to arrive out here all those years ago and then when the next generation came out to America I was able to help and support them when they arrived.

“I was also involved in the parades for Co Longford here as well; we had so much fun down through the years.”

Daughter of the late Mike McCormack (Cranley) and Marcella Reilly (Cloncaugh), Mrs Flynn still has lots of family and relations living in Co Longford and throughout Ireland.

Her sister Marcella Farrell resides in Legan while Mamie Kane lives in Co Wicklow, and another sister Peggy Reilly is based in Edenderry, Co Offaly.

She is also related to the Reillys of Killasonna  - just outside Granard.

Four years ago, the Longford woman was diagnosed with pancreatic cancer.

It was a shock, but Mrs Flynn’s resilient nature and positive outlook helped her to heal, and now she is cancer free.

“I have recovered very well from that; really it was great to be here in America where I was able to get the best treatment,” she smiled.

During her years running the pub in Queens with her husband, many of the great Irish musicians and singers played the venue.

Many of the greats like Dermot Hegarty, Larry Cunningham and Brendan Shine not only did gigs there, they also became dear friends of the Flynns.

She recalls those days with great fondness; it was a time when  wonderful friendships were cemented and solid roots put down.

The pub was sold after John Francis died and Mrs Flynn continued with her work in the local community.

She has been described by those who know her as a stalwart in Queens and it came as little surprise to many that she became the deserving recipient of this year’s prestigious award by the Co Longford Association of New York.

She is a regular visitor to Co Longford and was home as recently as last year.

“I love coming home,” she smiled.

“I love seeing everyone again; it is wonderful.”