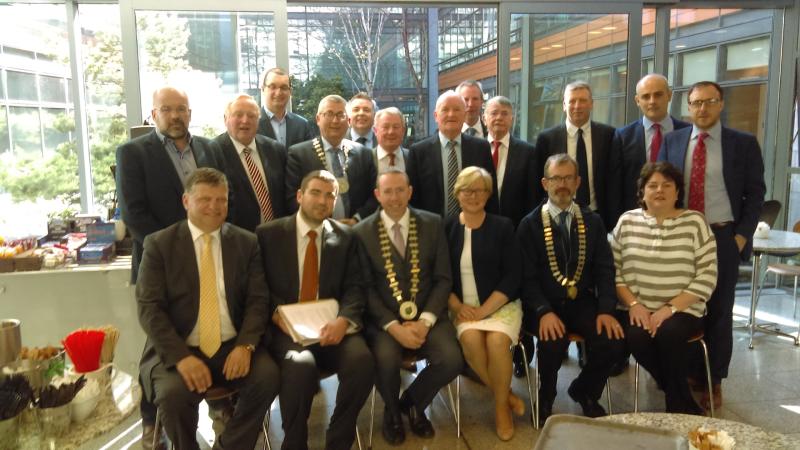 Representatives of the the N4/N5 Joint Affiliated Chambers who met with Oireachtas Joint Committee on Transport Tourism and Sport.

A grouping titled the N4/N5 Joint Affiliated Chambers comprising nine Chambers of Commerce and Industry from the Midlands, West and North-West of Ireland today met with the Oireachtas Joint Committee for Transport Tourism and Sport.

The aim of the session was to highlight the necessity to include the N4/N5 motorway upgrade project in the mid-term Capital Programme review currently been undertaken by the government.

Councillor Seamus Butler of Longford Chamber of Commerce and Industry introduced the members of the delegation to the Committee and indicated that this was a key piece of infrastructure for a wide region of the country.

Mr Butler stated “This project has the potential to increase development opportunities and bring new business to the region now and into the future.”

Dr Brian McCann of Sligo IT gave detailed evidence to the committee in relation to the necessity for a road upgrade to the regions primarily since the N4/N5 corridor is one of the main arterial routes in the country and the last one to be developed. Professor McCann highlighted significant statistics supporting the argument for the upgrade of the roads, not least that part of the road network there is currently running at 120% capacity.

Ciaran Corcoran, Site Director of Abbott Longford and currently President of Ibec in the Midlands region provided his overview on how adequate road infrastructure dovetailed with economic and inward investment into the country and indeed the regions serviced by these roads.

A recommendation made by Fine Gael Senator John O’Mahony which was seconded by Fiánna Fail TD, Robert Troy and supported by all parties attending the Committee will make a recommendation that Minister includes the project in the upcoming Capital Programme review.

Chairman of the Committee, Brendan Griffin of Fine Gael also indicated that he would ensure that minutes of the meeting would be forwarded to Minister Ross and Minister Donohoe such was the importance of the project.

The next stage of the programme to move this project forward will be a request to meet with An Taoiseach, Enda Kenny, TD and Minister Donohoe to impress upon them the importance of this project.

Commenting following the meeting Derek Scanlon, President of Longford Chamber of Commerce and Industry stated, “The investment required for the design stage of the next phase of the project from Mullingar to the Leitrim border is in the order of only €5 million over the next three years. That level of investment will see the project ready for CPO and construction once funding becomes available. This project has the potential to impact positively the entire Midlands, West and North-West region for decades to come.”