Longford property sales dropped 14% in first quarter of 2017 according to MyHome.ie 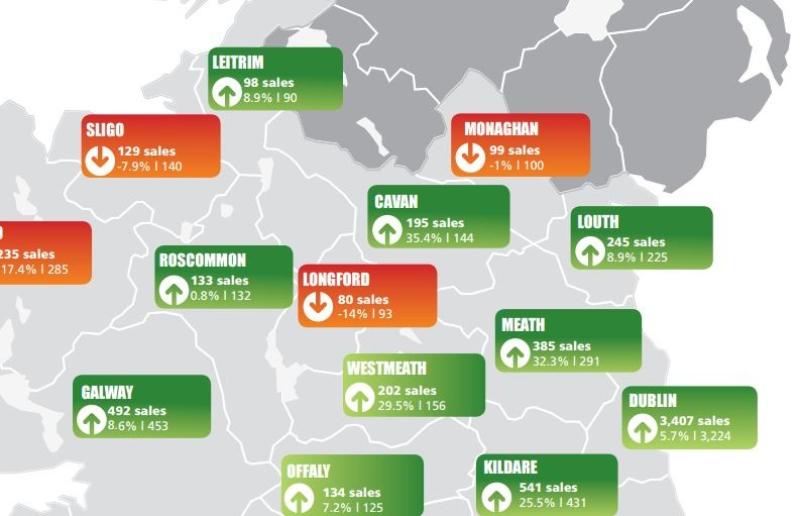 Property sales in Longford had dropped by 14% in the first quarter of 2017 compared to the same period last year.

This bucks the national trend according to the latest report from MyHome.ie which found that property sales across Ireland have increased by 4.9% in the same period. According to an analysis of the Property Price Register carried out by property website MyHome.ie just over 10,000 properties changed hands in the first three months of the year.

But the figures also show that Longford is the only county in this region to record a decrease in property sales. Longford recorded 80 property sales in the first quarter of 2017 compared to 93 in the same period last year.

Not surprisingly, sales in Dublin comprised just over a third of this total at 3,407, an increase of 5.7% on the same period last year.

Angela Keegan, Managing Director of MyHome.ie said one of the most notable trends was the upswing in sales in the capital’s commuter belt.

“Sales in Meath are up 32%, Kildare is up 26%, Wicklow is up 17% while Louth is up 9%. We’re all aware of the shortage of properties in Dublin and the resulting higher prices so it’s clear buyers have decided – or have been forced – to opt for more affordable properties in neighbouring counties. While often the properties outside Dublin are bigger and newer the downside is the commute. Interestingly the border region delivered the two counties with the  biggest increase and decrease in sales; Cavan recorded a 35.4% increase, while Donegal saw sales fall by 21%.”

“While sales may be up in the commuter belt and most other parts of Leinster, it’s a very different story in the west and south. Sales in Donegal are down 21%, in Sligo its 8% and in Mayo it’s 17%. Further south they are down 16% in Limerick and 8% in Kerry. Interestingly Clare is up 35%, while Galway is up 9% and Westmeath is up 30%. These figures show that the Irish property market is no longer just Dublin and the rest of the country but has fragmented into a number of micro markets which move in response to a variety of local and national factors,” Ms Keegan said.