Longford Living: The Ploughman and the Stars 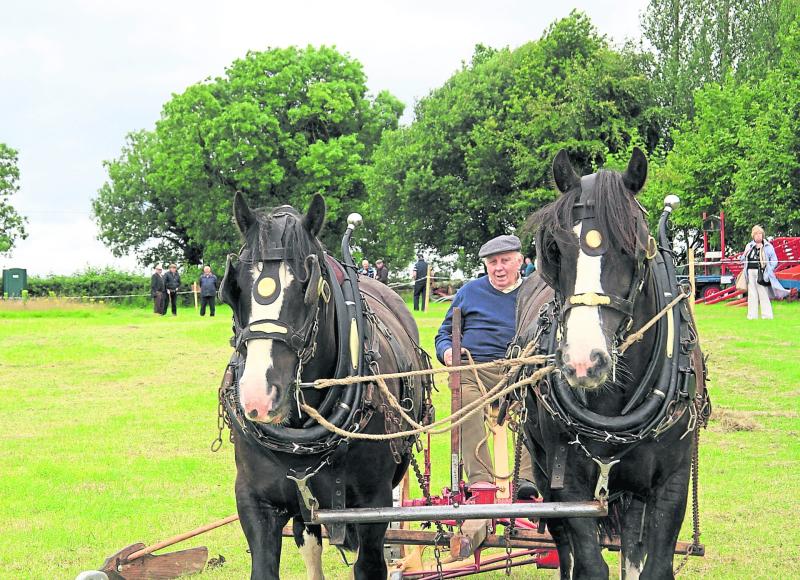 And it’s no lie to say that he has in fact been ploughing since he was a gossin.

Eamon is a former chairman of County Longford Ploughing Association and current Secretary of the Loy Association of Ireland, and he went to his first ploughing match in 1957.

As he says himself, he didn’t fare out too good, but he was there to get the experience and improve his skills as much as he could.

Eamon qualified for the All-Ireland Ploughing Championships that year and he has been going every year since.

And, later that year there was a meeting held in Ballinalee one night and it was about how best to represent the county at the National Ploughing Championships.

“We discussed where we would hold the county event the following year and I suggested Kenagh,” Eamon recalled smiling.

“We were told it could be possible, so I went off with myself and found the perfect site for the match.”

In 1960 the County Longford Ploughing Championships were held in Kenagh and that was a special day for Eamon Egan and his family.

“That year we introduced the Farmerette Class, and now 50 years on it is still as strong as ever,” he added, although he also pointed out that the class wasn’t without its opposition.

“Elizabeth Farrell from Newtowncashel came on board and she came fourth at the national event; then it went great from then on.”

A highly regarded ploughman from Dublin - Willie Murphy - came to the Co Longford Ploughing Championships that year and it was the first time that a ploughman from outside the county participated.

The national championships were held in New Ross that year and on the first night there, great excitement became evidence in the early hours and neither Eamon or his fellow ploughmen could understand what was going on.

“The next thing was we were told that a New Ross man had just been elected president of America,” he smiled.

“John F Kennedy was his name!”

As wonderful as that was, the very next day as the ploughmen headed out onto the field, the news broke of the atrocity in the Congo.

“There was a minutes silence called for those men that day,” Eamon recalled sadly.

“There was a deep sense of sadness everywhere you went that day; I remember it well.”

Modernity was in its infancy and machines were getting bigger, stronger and more automated.

“Things were getting a bit exciting at that time; we were moving from the horse period into the era of the tractor and there were a few men with new tractors,” said Eamon.

“I remember at a match one time there was two or three tractors on view and we all stood around in awe.

“That was such a sight.”

It was a time too when the ploughing was sponsored by the Co Longford Agricultural Committee, which held great stead in the county at the time.

There was great prizes on offer at the ploughing championships back then too, and naturally enough, as Eamon says, that was a big attraction as well.

Traditional farming methods are what appeals to Eamon the most.

The Kenagh man loves horses and horse ploughing and is synonymous with introducing the Loy digging back into the national ploughing championships as well.

He was one of the main instigators behind the revitalisation of Loy digging back in the 1980s.

After the emergence of no less than three All-Ireland Loy digging champions from Longford a few year’s back - Matt Connell Sr and Bernard Casey (Senior Loy) and Matt Connell Jr (Junior Loy), Eamon began to take a nostalgic look back at the skill and the importance it held for the land before advances in machinery took hold.

“Up to the end of the last Century, most land was tilled by hand with the use of the Loy or similar tools,” he told the Leader.
“In some southern countries, the Loy was known as a FACK and there is much evidence in many of our fields with tracks of ridges of bygone days both for grain and potatoes.
“Spade ridges from beneath the blanket bogs in north Mayo’s Ceide Fields date back over 4,000 years to the Bronze Age, so the Loy or similar tools go back further than the recent past.”

Many believed that the Loy signified the existence of poorer farming areas in Ireland, but on the contrary, the plough was necessary for good tillage.

“There is an account of farmers, on the more fertile lands of Kilkenny and Tipperary who found it more economical, taking labour costs and crop return into consideration to till the big fields with the Loy or Fack rather than the plough,” the Kenagh man continued.

“Of course the plough has much improved, but every year large numbers of young men from Kerry, Clare and Mayo to Donegal and Cork made their way inland to the hiring fairs at which the farmers made bargains for their spring work to be done.”

Meanwhile, across the world, the Irish were noted for their physique and skill in the use of hand tools such as the spade that built the railways and canals around the world.

Every area had its own design of the Loy - depending on soil conditions.

The Loy Association of Ireland was established on July 31, 1992.

It aims to foster the ancient craft of Loy digging and encourages its revival where possible.

“I am reminded of an old proverb as we speak,” added Eamon.

“‘Work hand and foot, work Loy and hand, the blessed fruit that grows from the root is the real gold of Ireland’.”

In 1992 Anna May McHugh and Monica Carr, Journalist with the Irish Independent spoke to Eamon about the Loy.

The skill was making a come back and those in ploughing circles became very aware of this.

Shortly after that meeting with the two women, Loy digging became part of the national ploughing event and it has been part of that ever since.

Meanwhile, the County Longford Ploughing Championships went from strength to strength and competitors and spectators alike began coming from all over the country to local matches.

From Kenagh, to Ardagh to Lisryan, the local ploughing championships weaved their way through the county bringing people from all backgrounds, many with precious skills, all of them focused on keeping the traditions of Irish country life alive.

At that time, the Co Longford Agriculture Committee was busy sending out information and organising meetings to inform farmers how to get the best from their land.

When Eamon wife’s Eithne passed away around 10 years ago, Eamon became more involved in horse ploughing.

She too was deeply involved in the County Longford Ploughing Association.

He travelled around the country meeting with horse owners everywhere, and eventually he purchased four work horses including Murph and Gerry who are now as well known on the field as their owner is!

And, now at 83 years young, Eamon is planning for the next ploughing event which takes place in his native Kenagh on Sunday 30 April next. It will be an all-horse ploughing event and is something that remains very close to Eamon Egan’s heart.