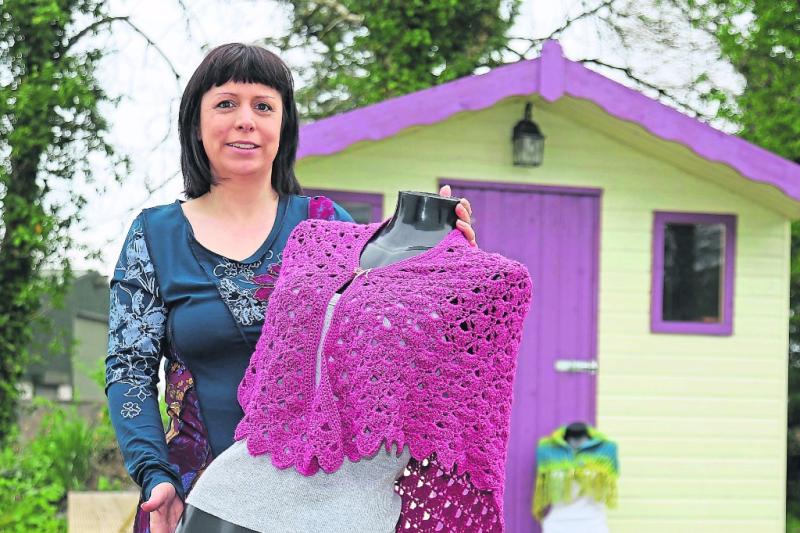 In an age of television and social media, art and craft hobbies aren’t as popular as they once were. But one Drumlish-based woman is determined to bring back the art of craft-making at her new business in Bramblewick House.

“Craft can be used as a form of relaxation. Often you can forget about the usual trials and stress of everyday life,” Amy French told the Longford Leader last week.

“I have been crocheting for a few years now. I have a lot of friends who have craft-related hobbies. They have been, and still are an inspiration to me.

“I also have had a lot of talented members of the family. My dad used to be an outstanding painter. My grandad used to make latch hook rugs. I have fond memories of him sat on the floor, cutting up strands of yarn, sorting them and making rugs.

“I also used to groom dogs in the UK, which is a practical craft. I just seem to be naturally drawn towards practical activities.”

Amy moved to Longford last August from Suffolk in the UK, after she inherited a house from her dad in Kilnashee, Drumlish.

“While in the UK, I had a couple of stalls, but felt that I wanted to take my passion further. So we decided to sell up and move over,” Amy explained, adding that she moved to Longford with her husband, Craig, and their cat, Splodge.

“We chose the name Bramblewick House because, when we first came over to Ireland (we visited twice a year while the house was going through probate), the two-acre garden was overgrown and the drive was a mat of brambles.

“‘Wick’ means ‘place of’, so we had to go with place of brambles! This is a new venture, which we look forward to expanding.”

At the moment, Amy is making handmade products, which she sells at craft fairs around the midland counties of Ireland.

“My main passion is crochet, but I also make friendship bracelets and cards. I’m also expanding into polymer clay,” she said, referring to a clay that can be used to make beads for jewellery.

And, with such a passion for crafts, it’s no surprise that Amy plans to expand her business in the immediate future.

“At the moment I am holding workshops in crochet, friendship bracelets, card-making and polymer clay at Bramblewick House. These will be small workshops (of up to six people). I will also be available for one-to-one sessions,” she said.

“I am in the process of being able to hold craft birthday parties. Soon, I hope to hold workshops in schools and other establishments and institutes,” she said, adding that she is currently in the process of getting garda vetting, so she can fulfill these goals.
Amy’s next workshop is a crochet workshop, which will be held on Saturday April 29 next. Details can be found on the Bramblewick House Facebook page, where she will be posting more workshop events as and when they come up.

During the friendship bracelet workshops, Amy will demonstrate how to make various patterns from a series of knots, and the polymer clay workshops will introduce attendees to the material used to make jewellery beads.

Amy will also be holding card-making workshops, which will demonstrate the various sorts of media that can be used to create personalised, special cards for any occasion.

For more information on upcoming workshops, or to organise a workshop for a group, contact Amy via the Bramblewick House Facebook page, or visit www.bramblewickhouse.eu.